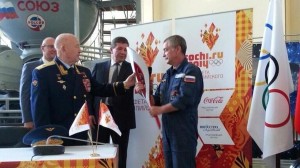 A Canadian company’s initiative to let everyone stream footage of Earth as seen from the International Space Station has been delayed. No, this delay has nothing to do with residual backups from July 1’s crashed Proton. This time, the culprit is the 2014 Olympics.

UrtheCast‘s two cameras, a 1 m resolution still and a video, were scheduled to head for ISS on October 16 aboard the resupply vessel Progress M-21M. In a flight schedule reshuffle, however, that flight is now bumped to November 20, making room for a November 29 launch of the ISS Expedition 38/39 crew to be moved up to November 7. Assuming everything goes off exactly on time, that will allow The Expedition 38/39 crew to carry with them an Olympic Torch, handing it off just in time for Expedition 37/38 to take it with them on a scheduled EVA, then return it to Earth with Expedition 36/37 when they undock on November 11, putting it back on the road to Sochi for the February 7 Winter Olympics opening ceremony.

While UrtheCast was the first to publicly speak about the schedule change, the shuffle will have more serious implications than the company’s delayed streaming. With the change in the Soyuz launch schedule – which NASA is not yet reporting, noting the date as “November 2013” – ISS will house nine astronauts at once. Usually, a crew change is accomplished by sending home three members of a six person crew before receiving the next three. The station is designed to comfortably house seven. The maximum number of individuals accommodated in space at one time stands at a record 13, but that was only possible with the Space Shuttle in attendance. As it is, the ISS may be a bit cramped for a few days as crew from Expeditions 36 through 39 sort themselves out.

The Torch that started all the trouble will be the first to travel through space on its way to the Olympics. Out of deference for safety concerns, an artificial flame will be used for the entire space leg of its journey. While the decision to send the Torch to space was announced in June, the implications for launch scheduling is just filtering out now. Russian space icon Valentina Tereshkova will also carry the Torch for part of its ground journey.

UrtheCast will finally get their cameras up and running on December 8, when they are scheduled to be installed during a Russian segment EVA.