Last year, Facebook, in partnership with Eutelsat, agreed to lease the entire African Ka-Band payload on the ill-fated Amos-6 satellite for $95 million over five years, pursuant to Facebook’s initiative to start delivering affordable internet access to the developing world.

Until March 2016, SpaceX did not mount satellites onto the Falcon 9 rocket until after the static fire test was complete. Beginning with the SES 9 launch, however, SpaceX modified its testing procedure in a bid to save cost and time. Facebook’s internet plans went into smoke when the Falcon 9 exploded on the launch pad last week. It will take years before a replacement satellite can be launched. But Facebook may have an alternative: Aquila (Italian for Eagle), a solar-powered high altitude drone, also called pseudo-satellite, which just completed the first successful flight in June.

Aquila, is a cheap alternative to satellite. It will beam internet to remote parts of the world and eventually break the record for longest unmanned aircraft flight. The June test flight took place before dawn in Yuma, Arizona. The original mission was to fly Aquila for 30 minutes, but things went so well that it was decided to keep the plane up for 96 minutes. Eventually, Facebook’s goal is to have a fleet of Aquilas flying together above 60,000 feet (about 18 km), above weather turbulence and air traffic, communicating with each other with lasers and staying aloft for months at a time. 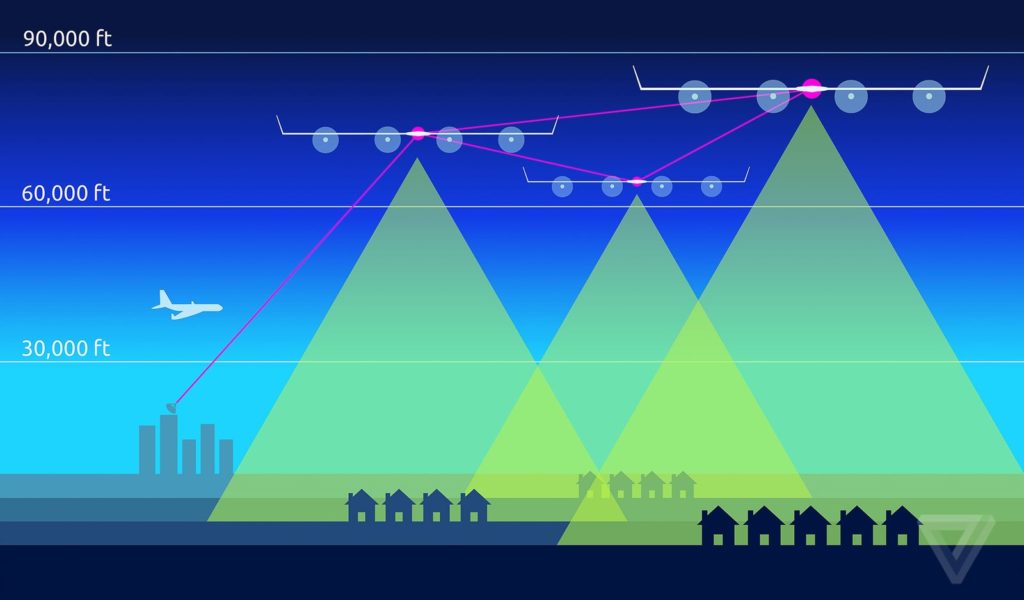 Flying between 60,000 and 90,000 feet, Aquila uses lasers to transmit data to other aircraft as well as receivers credits: the Verge

Weight: Aquila has a wingspan wider than a Boeing 737, but has to weigh as little as possible to stay up for as long as possible. That’s why the body of the plane is made of a carbon fiber composite so the whole thing weighs less than 1,000 pounds.

Power: The amount of energy Aquila collects from the sun during the day has to be enough to keep its propellers, communications payload, avionics, heaters and light systems running when it’s dark. That means using about 5,000W of power at cruising altitude.

Control: Aquila is mostly self-sufficient, but it still relies on a ground crew of about a dozen engineers, pilots and technicians who direct, maintain and monitor the aircraft. They control the aircraft through software which allows them to determine heading, altitude and airspeed.

Speed: One of the most surprising things is how slow Aquila goes. That’s on purpose. In order to use the least amount of energy, Aquila needs to go as slow as possible. At higher altitudes, where the air is thinner, the plane will go a bit faster, about 80 mph.

Altitude: In order to take off, fly and land, Aquila’s wings and propellers have to be able to operate both in high, cold altitudes above 18 km in near-space and lower, warmer altitudes where the air is 10 times denser. Note: near-space extends from 18 km to 160 km.

Load: Almost half the mass of Aquila will come from high-energy batteries.

Communications: Aquila will carry a communications payload that will use lasers to transfer data more than 10 times faster than existing systems. It will be able to aim its beams precisely enough to hit a dime more than 11 miles away while in motion. 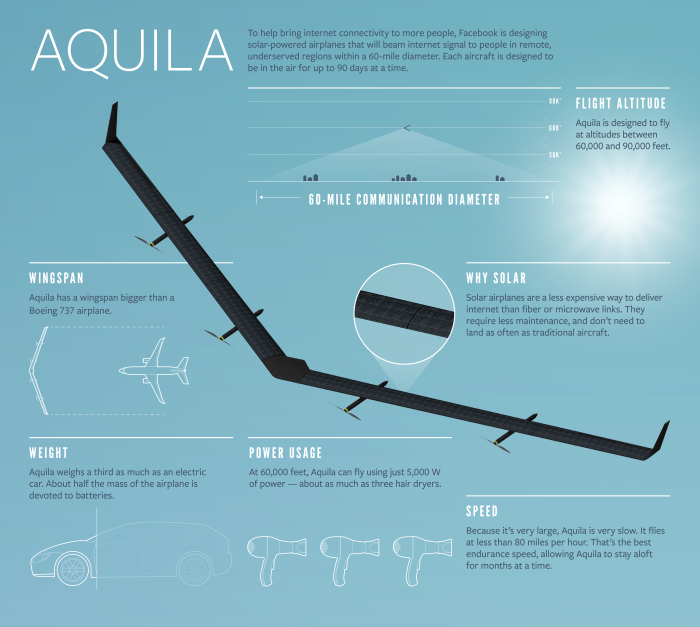 Inside Space on Earth