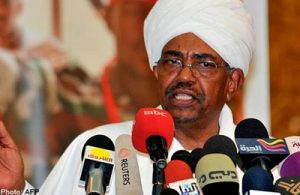 Sudanese President Omar al-Bashir at the meeting of Africa’s communications and IT ministers (Credits: AFP).

At a meeting of Africa’s communications and IT ministers on Wednesday, September 5th, the states’ representatives discussed the creation of an African Space Agency they called AfriSpace. The new Agency would be formed as a cooperation of African States for the peaceful uses of space research and technology in the African Union (AU).

The first step towards a common approach for African space policy was the founding of the Regional African Satellite Communication Organisation (RASCOM) twenty years ago. In 2007 RASCOM launched a satellite, the ill-fated RASCOM-QAF 1, which failed due to a helium leak and had a shortened operational life of 2 years after reaching geostationary orbit. The replacement satellite was ordered immediately and followed in 2010. These satellites provided voice and data services to the entire African continent. They provided support to health projects, broadband internet connectivity, radio and TV broadcasting as well as health education, according to the organization’s homepage.

To expand on this idea of a common peaceful cooperation in space research, the African Union Commission was asked to conduct a feasibility study for an African Space Agency at a conference of Communications Ministers in 2010. This paper was seen as a “roadmap for the creation of the African space agency,” and contained the observation that only a minority of African countries have space technology. Today, only South Africa, Nigeria, Egypt, and Morocco have space agencies on the continent, and their scope is limited. None of those nations currently have their own launch capabilities. However, this minority play a major role in African broadcasting, weather forecasting, environmental and agriculture monitoring, health, and more. “A common continental approach will allow the sharing of risks and costs and ensure the availability of skilled and sufficient human resources,” the document said. AfriSpace could provide a long-term space policy for the African continent with the aim of coordinating space resources of the member states. With demand for internet and phone access increasing, information and communications technology is taking on an evermore important role. However, whether a continental space agency can compete for resources and attention in a region beset by poverty, malnutrition, and conflict remains to be seen.

Below,  a history of South Africa’s space activities: