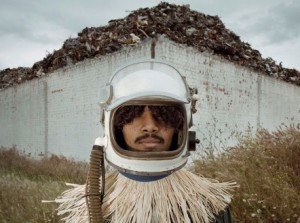 It’s not only the rich and powerful who have ambitious dreams of space exploration, as was recently illuminated by a project of Spanish photographer Cristina de Middel. Scraping the depths of the internet in a quest for a quirky, unbelievable story, she came across an article about a grade-school teacher in Zambia who, in 1964, established a makeshift Academy of Sciences and Space Technology. His name was Edward Makuka Nkoloso and, in an article he wrote for his local newspaper, he didn’t hesitate to boast that he would bring his countrymen to Mars.

It was in the midst of the space race between the USSR and the USA, landing on the Moon was still five years in the future, and Zambia, known to most only for the stunning Victoria Waterfalls, had just gained independence from the British Empire. The newly established Zambian government had other pressing matters to deal with – conflicts with the neighboring Rhodesia, missing transport and industrial infrastructure, insufficient power supply and, of course, as almost everywhere in Africa – extreme poverty. 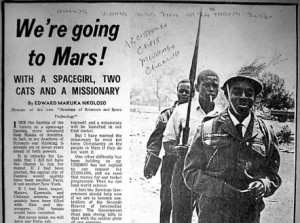 The controversial newspaper article about Zambia’s space program. The godfather of the project, Edward Makuka Nkoloso, is in the front (Credits: Erik R. Trinidad, THEGLOBALTRIP.COM).

Edward Makuka Nkoloso was therefore left completely alone in his enthusiasm. But it didn’t stop him. His training academy, located in the outskirts of Zambia’s capital Lusaka, recruited the first space cadets and subjected them to rather unconventional training methods. To prepare for weightlessness, they were rolled down a hill in oil drums. In the meantime, Nkoloso was studying Mars through telescopes – at least that’s what he claimed. “Specially trained space girl Matha Mwambwa, two cats (also specially trained) and a missionary will be launched in our first rocket,” he said confidently.

The venture came to an end after his request for funding from UNESCO was turned down and the 17 year old space girl got pregnant. Almost 50 years later, the project called Afronauts recreated the tale using various creative approaches. Cristina de Middel, who has never visited Zambia, is now celebrating a success, as Afronauts are getting international attention due to her work. Afronauts was nominated for the Deutsche Börse Photography Prize and the exhibition is currently on display in London. The UK tabloid Daily Mail called the pictures ‘hilarious’ and ‘poking fun’ at the ‘infamous’ Zambia space program. But are Africa’s space efforts really such a laughing stock?

It is a widely held belief that improving education, especially in science and technical disciplines, can lead Africa out of poverty. Space is expected to play a crucial role in that regard – its powers to inspire and attract young people to meaningful activities are well known and the socio-economic benefits space applications can bring to countries in terms of jobs, environmental monitoring and resource management, are frequently talked about.

Today’s Zambia might have not gotten any closer to launching people to space, but is an active  member of the Space Generation Advisory Council, organizing outreach activities aimed at attracting children and young people to science. 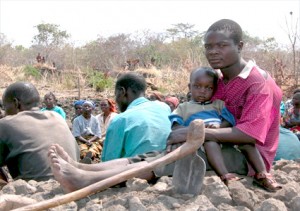 Zambia is one of the poorest countries in the world (Credits: Youthsdreamforzambia).

After the economic crisis, induced by dropping prices of copper – Zambia’s primary export article – in international markets in the 1970s, the situation somewhat stabilized at the turn of the century. In 2010, the World Bank named Zambia one of the world’s fastest economically reformed countries. Perhaps it will soon follow other African states which have already successfully embarked on the space adventure.

After South Africa and Nigeria, who are among the rising stars of the international space sector, Ghana has established its Space Science and Technology Center (GSSTC) in May 2012. The country’s nascent space program wants to utilize space science and technology for better development of the country. Similarly to Nigeria, Ghana is interested in space applications to add natural-resource management, weather forecasting, agriculture and national security. The center, currently employing only ten people, works closely with the Space Generation Advisory Council to engage university students and young professionals in collaborations related to space exploration and its applications.

Perhaps the silly dreams of a Zambian grade-school teacher will one day get closer to reality and Zambia, the country where 68% of people live below the poverty line, will have at least their own satellite. And then? Only the sky is the limit.

Cristina de Middel wasn’t the first to pick up the Zambia Space Program story. Watch the authentic video below.