Ugandan Chris Nsamba invests 15 to 20 hours of each day in the same dream that inspired the August-released Europa Report: finding life in the solar system. With a few tools and help from a handful of engineering students, Nsamba, in time, plans to break through the space barrier with a shuttle. First, though, he’s building a probe to do the same thing, and his message to the naysayers is as modest as his outdoor workshop: “At least we are trying.” 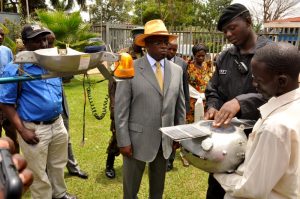 Pictured to the right of the center, Chris Nsamba shows off his space probe to the prime minister of Uganda, Amama Mbabazi. (Photo credit www.ugandanway.com)

Space Safety Magazine first wrote about Nsamba’s ambitions in 2011, when the then-26-year-old predicted his space probe–nicknamed the Cadimella–would take about five years to build. Today, the probe boasts solar panels and a camera that Nsamba envisions will send live photos and videos back down to the control center. In 2011, he also said that within 10 years he’d like to send a man into space. For his probe, he’s sticking with a rat.

“The probe was tested under a vacuum environment,” said Nsamba. “Parachute deployment has also been tested physically by dropping it out of a plane, and the ground station has executed parachute deployments. Long range radio control systems transmitted and received right. We have tested it and I am proud to say it is in good shape.”

Although confident in the trials and his technical prowess, Nsamba hasn’t ruled out the possibility for delayed success.

“We are freaked out by air friction normally termed as re-entry; however, we hope this problem won’t be so intense since we won’t reach space shuttle orbiting altitudes,” he said. “Based on the weight of this project, since it only weighs 4.8 kg, we don’t anticipate high velocity speeds which create friction during re-entry, meaning we hope it will fall back to Earth a little slower based on its weight. However, we have silicone-tiled it in order to survive this friction environment if any develops.”

He has not yet set a launch date due to lack of enough funding in the project, despite the donations from 986 individuals in addition to a grant from the Ugandan government.

“Funds have caused delays; we can’t commit on a time range until we get enough supporting commitment towards this mission,” he said.

Brad Inggs is the CEO of Orbital Horizon, a commercial space solutions agency based in South Africa that has been following the media on the project. He believes Nsamba—who founded the African Space Research Program in 2009—is well-poised to leverage the support he needs, though he should heed its ephemeral nature.

“He’s successfully been noticed by the media but he needs to look at the next step which will keep that interest going and in the most practical way possible, with wise investment of time and resources, including safety,” Inggs said.

“We support anyone’s passion for space development and certainly urge Nsamba to continue forward in reaching his dreams,” said Inggs. “People might say he is wasting his time on building a spacecraft that might not fly, but would he have gotten the amount of attention he has if he didn’t begin this project? Would Uganda have gotten the world’s interest it has if he didn’t build anything? Highly doubt it.”

John Engel, a recent graduate in physics and astronomy from the University of Tennessee-Knoxville, also praises Nsamba’s efforts but is doubtful Nsamba can feasibly launch a space shuttle within the next decade.

“He would need a rocket. He needs life support systems, high-tech shielding, crazy boosters and multi stage rockets and computers. The list goes on and on. The NASA shuttle exploded a few years back and it was one of the most advanced things on the planet built by hundreds of experts,” he said. “He is definitely disillusioned, but that’s kind of what’s so inspiring. Nothing in science would be advanced if we didn’t take big risks.”

“Nothing stops him from placing his early spacecraft into a ‘Uganda space museum’ and offering outreach to schools and the public, developing a firm foundation to move forward with, and igniting the possibilities of space in people’s minds,” he said. “Space is a long-term investment and we’ve seen way too many bright projects fall into the darkness.”

As for Nsamba, he believes he and his team members are honorable and courageous role models for Africa’s future generations.

The following video, published in December 2011, shows Nsamba and team members crafting Uganda’s first jet aircraft in his outdoor workshop. He is captured saying, “We are supposed to at least have a probe in the lower orbit of the Earth, at least in the next four or five years.”