After months spent attempting to unravel the US budget knot, Congressional hopes to reach a balanced budget balance were, once more, disappointed last month with the legislature’s failure to pass a budget and prevent sequestration. Funding of federal agencies will stop as of March 27, according to the spending bill approved on October 1, 2012. Governmental agencies like NASA will have a clearer view of the effects of intermediate budget cut measures on their programs in the next months, assuming absence of a financial year 2013 budget. Meanwhile, the House of Representatives Appropriations Committee on March 4 approved the Full-Year Continuing Appropriations Act of 2013 (H.R. 933), whose aim is to keep the federal government running through September.

“We are doing everything in our power to protect the Agency’s core priorities, minimize disruptions to employees,” said NASA Administrator Charles Bolden in an e-mail to agency employees and contractors  on  March 13. “These changes do not reflect a diminishment of our commitment to training, professional development, and inspiring the next generation of scientists and explorers.  New budget constraints simply require us to achieve the same goals through different means, which may include the increased use of digital, social, and other communications technologies.”

Budget cuts have been illustrated in a report sent to Congress by the White House Office of Management and Budget (OMB) that also notified affected agencies of the sequestration order. Congress included the threat of sequestration – cuts to the federal budget by a set amount across most departments and agencies – in the Budget Control Act of 2011 to encourage formation of a budget agreement. But Congress did not agree on a budget by the deadline set in the Budget Control Act: January 2, 2013. Nowadays the term sequestration describes a fiscal policy procedure provided in the Gramm-Rudman-Hollings Deficit Reduction Act of 1985. As a result of budget cut disagreements among legislators, Congress passed the American Taxpayer Relief Act postponing the budget cuts until March 2013. With Congress unwilling to further postpone the measure and unable to pass a budget, the cuts went into effect and are not expected to be repealed anytime soon. Nearly all parties had envisioned the catastrophic effects of sequestration in advance of the measure; most of those effects are still in the future. The cuts are equally applied to “all programs, projects, and activities within a budget account,”excepting programs such as Social Security and certain parts of the Defense budget. Dr. Stephen Fuller, economist at George Mason University, in a report issued in December 2012 warned of  the economic impact of sequestration on NASA: “ Such a dramatic collapse in our technical workforce could lead to a major loss in current national capability[..] Sequestration cuts would result in far reaching and lasting losses for major aerospace clusters beyond the space industry.”

NASA’s budget accounts have been cut a total of $896 million and whether the above mentioned Full-Year Continuing Appropriations Act of 2013 (H.R. 933) would become law, NASA would reabsorb the 5% budget cut displayed below in the table, courtesy of SpacePolicyOnline. 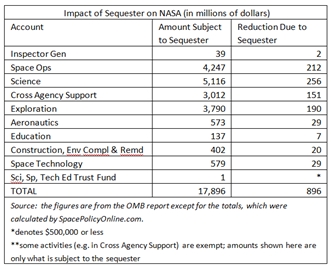 Aeronautics will reduce its budget by $7.3 million below the FY 2013 budget request, cutting funding for facilities maintenance and support; air traffic management concept development; systems analysis conducted with the Joint Planning and Development Office; research into safety for vehicle and systems technologies; and research into civil tilt-rotor technologies. It will entail diminishing NASA ability to develop technologies necessary to enable next generation air traffic management and to ensure needed safety levels. 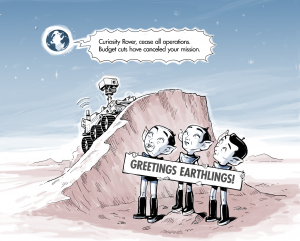 Furthermore, NASA Science program is to be reduced $51.1 million below the FY 2013 budget request, affecting new Explorer and Earth Venture Class mission selections, reducing their funds from 10 to 15%, lowering funds for new activities and causing minor launch delays, as well as reducing funds allocated for competed research projects by about 2%, cutting 5% in support jobs at universities, businesses, and other research entities around the nation.

Overall availability of commercial crew transportation services are expected to be significantly delayed, thereby extending US reliance on Russia for crew transportation to the International Space Station.  Space Launch System will actual see increased funds over their 2012 levels, moving $381.2 billion from NASA Space Operations and Cross Agency Support accounts, into the Exploration account. Commercial Crew Integrated Capability (CCiCap) will not achieve the foreseen milestones for the last quarter of 2013, due to sequestration cuts. Space Technology has been reduced by $149.4 million below the FY 2013 budget request, risking losing several ongoing projects as they require increased funding in FY 2013 to proceed.

The sequester process has reduced Exploration Research and Development funding by $45.5 million below the FY 2013 budget request, delaying Advanced Exploration Systems procurement of critical capabilities required for the next phase of Human Space Exploration.

NASA has revised its policy regarding  conference participation and other travel in order to adapt to sequestration measures, issuing new guidelines on training, hiring, and travel: attendance at conferences within the US is limited to “essential and/or necessary” cases, with no more than 50 NASA civil service and contractor employees participating; participation in foreign conferences is prohibited. The National Space Symposium, The American Astronautical Society’s Robert H. Goddard Memorial Symposium and Goddard Memorial Dinner do not meet the new NASA conference policy, therefore, said NASA Administrator Bolden, “Deputy Administrator Lori Garver and I have already begun to adjust our activities in line with these guidelines.  We have both canceled travel and participation in the April National Space Symposium in Colorado and I have also canceled a planned overseas trip.”

While the policy caused an immediate uproar, “this is likely the least-worst option they had to choose from.” said Casey Dreier, blogger for the Planetary Society. “The agency is trying very hard to avoid layoffs and furloughs and cutting conference travel so severely most likely saves jobs. Even so, there will now be a NASA-sized hole at major conferences. Fewer ideas will mix, less collaboration will begin, and the world will lose a little bit of the excitement and potential it once had.” Despite the mentioned restrictive measures NASA won’t change its hiring policies “Centers may continue to transact hires [..] in all categories.”

Sequestration will also affect NOAA’s Budget as Dr. Fuller explained in his report, cutting around 2,500 jobs on the weather satellites specialized workforce that has no equivalent in the public or private sectors, negatively affecting “the quality of weather forecasts in the near term.” Moreover, NOAA has been exposed during the lasts years to continuous budget cuts and the deprivation of $154 million from the developmental budget to replace polar weather satellites will not improve the situation. Polar-orbiting satellites continuously scan the planet from north to south. Instruments aboard these satellites are used for many applications in addition to weather forecasting. To cover the US emerging gap in earth observation ability NASA launched the Suomi National Polar-Orbiting Partnership (Suomi NPP) in 2011, until the next polar satellites generation, Joint Polar Satellite System (JPSS), will be operative. Recent budget cuts will probably delay the program, expected to be fully functional early 2017, by a year or two.  “Nearly a half trillion dollars of the U.S. gross domestic product was impacted by weather variability,” in 2012 says Dr. Fuller, an impact that could grow with decreased forecasting accuracy.

Though the US Space Sector is certainly not sailing in safe waters, Charles Bolden tried to put a characteristic positive spin on his unavoidably difficult message: “Although the next few weeks may not be easy, I am confident the NASA family will stay focused on our vital work and keep moving forward. We have the best workforce in the government, and I am grateful to be part of this amazing team.”

As Sequestration Goes Into Effect, Revisiting Its Effects on NASA, Space Politics