It’s been more than a week since Americans re-elected Barack Obama to serve as the president of the US for another 4 years. And even though we don’t know how the American astronauts currently aboard the ISS voted, there is no doubt they definitely had the opportunity to cast their ballots. According to the information available, both the Expedition 33 commander Sunita Williams and flight engineer Kevin Ford voted before their respective launches. 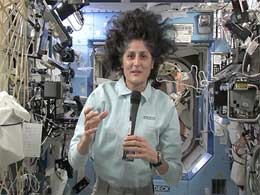 Expedition 33 commander Sunita Williams voted before her launch to ISS in the middle of July (Credits: NASA).

“They actually both did it while they were stationed in Russia, before they launched,” spokesman of NASA’s Johnson Space Center Jay Bolden commented on the issue. That means Kevin Ford fulfilled his civic responsibility prior to his October 23 launch, while Sunita Williams did so already in the middle of July, before her mission commenced.

However, provision exists for the astronauts to participate in the elections directly from space. A digital version of the ballot can be beamed up to the station from the Mission Control at the Johnson Space Center. After being filled in by the astronauts in orbit, the ballots are then sent back to Earth in the same way. “It’s a secure ballot that is then sent directly to the voting authorities,” Bolden explained.

The system was enabled by a bill passed in 1997 by Texas legislators. The role of the state of Texas in approving these procedures was crucial as most of the astronauts are Texan residents. The first person ever to vote from space was David Wolf, who was, at that time, aboard the Russian MIR space station. Wolf took part in local elections only. The first to do so in presidential elections was Leroy Chiao, commander of the ISS 2004 Expedition 10. 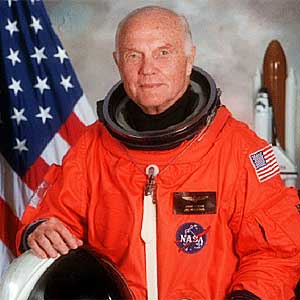 To proceed from a career as an astronaut to being a politician is a common move, in the US pioneered by the first American to reach orbit, John Glenn (Credits: NASA).

But not only do astronauts look for possibilities to have their say in national politics. As the statistics show, after concluding their active space service, many of them turn to active politics instead. In the recent elections to American Congress, former NASA astronaut Jose Hernandez aspired to be elected to the House of Representatives for the state of California. A Democratic candidate, Hernandez lost to the candidate of the Republicans, receiving 46.2 percent of the votes. Had he succeeded, he would have become the 6th astronaut in the US history to enter Congress.

The transition from a career in space to a career in politics was pioneered already by the first American to reach orbit. Similarly to his Russian counterpart Yuri Gagarin, American John Glenn became a national hero and for unspecified reasons was prevented from further space flight. Instead, in 1974 he was elected as a Democratic candidate to the US Senate for the state of Ohio and held the office for nothing less than a quarter of a century.

Apollo astronauts Jack Swigert and Harrison Schmitt, both Republicans, were elected to Congress: geologist Schmitt in 1977, while Swigert, a participant of the failed Apollo 13 mission, in 1982. Unfortunately, Swigert died from cancer before taking up the office.  Jake Garn and Bill Nelson took the opposite approach. First they became sitting members of the US Congress, only to seek the opportunity to fly in space afterwards.

Jake Garn’s jaunt in spac ewas particularly historic. In 1985, being the first ever politician to fly in space as a Payload Engineer, he experienced such a severe spacesickness during his space shuttle Discovery flight that a scale for space sickness was jokingly named after him. 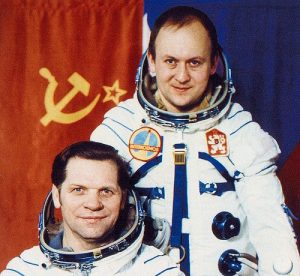 The first non-American, non-Soviet in space also turned to politics. Czechoslovak Vladimir Remek (on the right) is currently serving his second term in the European Parliament (Credits: Roscosmos).

But let’s have a look outside the United States. Russian and European astronauts also have a proven track record in advancing their careers from space to politics.  The first non-American, non-Soviet in Space was Czechoslovak Vladimir Remek, who spent a week aboard the Soviet space station Salyut in 1978. In 2004 Remek was elected a Member of the European Parliament for the Czech Republic where he is currently serving his second term. On his transition from being an astronaut to politics Remek said that becoming a Member of the European Parliament enabled him to return to space related topics and astronautics as he is actively following the European space policy. Another astronaut in the European Parliament is Italian Umberto Guidoni. He flew on the Space Shuttles Colombia and Endeavour and became the first European to visit the International Space Station in 2001.

The first Canadian in space, Marc Garneau, also turned to politics. After his 1984 Space Shuttle Challenger mission and another two subsequent missions, he won a seat in the Parliament of Canada in 2008.

Russian cosmonaut Yuri Baturin served as a senior aide to former Russian President Boris Yeltsin and  the first woman in space, Russian Valentina Tereshkova, later became a prominent member of the government of USSR and a well known representative abroad.