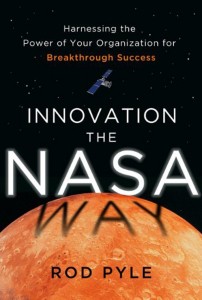 The National Aeronautics and Space Administration (NASA) is, without argument, the most famous space agency in the world. NASA is the Apollo program, the Space Shuttle, the planetary probes at the boundary of the solar system, the rovers riding on Mars, and much, much more. We usually see just the amazing results: Curiosity gently landing on the surface of the Red Planet, astronauts floating outside the International Space Station (ISS), the images from the Hubble space telescope – but where did these achievements come from?

Rod Pyle, in his new book “Innovation the NASA Way: Harnessing the Power of Your Organization for Breakthrough Success,” tries to shed some light on the principal challenges NASA had to face when preparing its milestone missions and to bring readers on a journey of the research into innovative solutions that ultimately overcame problems that seemed impossible to solve.

“Like many of my generation, I was enthralled by the flights of Mercury, Gemini, and especially Apollo,” writes Pyle. “As I grew older and matured into a career and family life, fond memories of NASA’s ’Golden Years stayed with me.”

Pyle, who is also producer, writer, and director of documentary programming for The History Channel and Discovery Communications, has authored many publications about NASA. In writing the book, Pyle interviewed many dozens of NASA people, not only astronauts, but also the “ordinary” personnel, from the space age forward, who contributed their experiences with great enthusiasm

“The men and women who worked on Apollo, the shuttle, ISS and the myriad robotic explorations of the solar system have a great passion for what they do, and it shows,” said Pyle in an interview with Space Safety Magazine. “Their enthusiasm extends beyond their individual areas of interest, and blossoms into a contagious desire to share what they do with the public.” 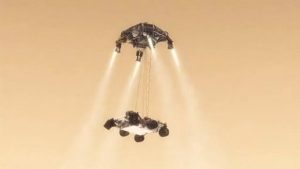 In its final phase of descent, Curiosity was lowered to the ground by a Sky Crane hovering above on jetpacks. (Credits: NASA).

The book presents the solutions developed by NASA for its most important missions, translated into general suggestions applicable to anyone, from the engineer working on a new planetary rover to the entrepreneur facing hard challenges and difficult-to-reach objectives.

“Think boldly, be daring, exhibit confidence, and, above all, test everything. Ducking the potential for failure can lead to disaster,” writes Pyle when describing how Rob Manning, Flight System Chief Engineer at the Jet Propulsion Laboratory, and his team managed to convince NASA management of the feasibility of the Sky Crane solution to land Curiosity on Mars.

Pyle takes the readers into well-known events from the point of view of the true actors who made history: engineers, scientists, astronauts, depicting their battles against bureaucrats and sometimes the “old way of doing things.” You will learn that innovation is not always welcomed: although Werner von Braun was initially allowed to work only with ballistic missiles and not with satellites, he conducted flight experiments disguised as “nose cone reentry tests” which he had later to give away to the US Navy. The military did not make good use of his research and in a hurry to fill the gap after the launch of the Soviet Sputnik in 1957, they translated von Braun’s research into the failure of the Vanguard program. This failure however, opened the way for von Braun and his team to start working on satellites and eventually develop the Saturn V. An example of the right people for the right job. 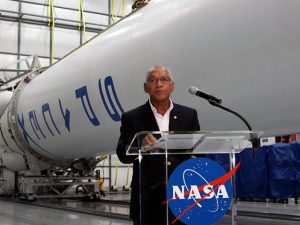 NASA Administrator Bolden in front of a SpaceX rocket hailed the conclusion of the agency’s Commercial Orbital Transportation Services (COTS) program in a news conference at NASA’s headquarters in Washington D.C., on November 13, 2013 (Credits: NASA)

Particular attention is given to the achievements of the Jet Propulsion Laboratory (JPL). “Programs tend to run more quickly at JPL due to the nature of robotic exploration and human lives not being directly at stake,” says Pyle. “While the Lab receives just a fraction of NASA’s overall funding, they are able to do much with limited resources. All these factors contribute to rapid innovation.”

What Future for NASA?

The last chapters of the book deal with the new waves of space entrepreneurs and how NASA adapted to the 21st century and to the decommissioning of the Space Shuttle. Budget restrictions and shifted priorities could have delivered NASA to a path of slow decline. NASA found instead another way to express its innovation: through the private sector and visionary entrepreneurs like Elon Musk.

“The work companies like SpaceX and Virgin Galactic are doing is ’sexier‘ and gets more press coverage,” explains Pyle who also emphasized that NASA has provided much of the technology, research, and safety protocols that private industry is able to capitalize upon. NASA will probably spend more time on exploration beyond Earth orbit while the private sector companies handle flights to and from Earth orbit, the space station, and other nearby destinations.

“Moving beyond Earth orbit is a much more difficult agenda, and one that is arguably best suited to government agencies at this point in time,” Pyle told us. “Private industry should supply and support routine orbital access, leaving NASA with more flexibility to innovate and explore. Innovation and exploration are NASA’s strongest abilities.” 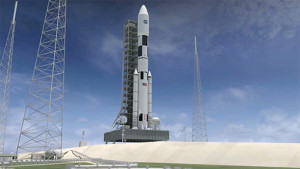 “The agency has also changed in some ways that are less desirable. While more demographically liberal, it is a more operationally conservative operation than it was in the past,” writes Pyle. Needs and budget changed from the 60s and NASA adapted. However, according to Pyle, there is something that did not change: NASA is still striving to encourage innovation. “The techniques vary among field centers and departments. One common theme is freedom—most departments that are engaged in planning future activities are given something akin to a ’blue-sky‘ mandate.”

“Think big, and don’t just think outside the box, start beyond the box. Think beyond three dimensions, if you will.”

Pyle points out also that much of NASA’s innovation is somewhat invisible to the public. “You have to be proactive to find material (which is, in fact, easily available on the web) about the vast returns from Earth-focused spacecraft to measure climate change, global weather patterns, and agricultural data, for example,” says Pyle.

“Innovation, The NASA Way” invites readers to embrace and pursue the constant search for novel ideas, despite challenges and low budget. Always keep in mind, it admonishes, the three commandments that helped NASA in all its most innovative achievement: be bold, be daring, be passionate.