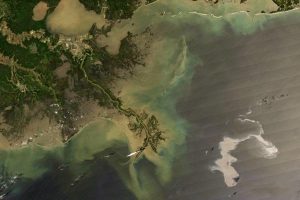 What does a NASA safety engineer do when his shuttle’s been retired and his agency’s downsizing? He signs up with the oil industry.

It turns out that many of the risk assessment methodologies and safety culture elements that NASA employees have honed over the the past decades translate quite nicely to the oil industry, according to recent reporting by Fuelfix‘s Emily Pickrell. For those once stationed at NASA’s Johnson Space Center in Houston, the oil business is practically a no-brainer, integrated as it is in the fabric of Texas life. And, just like NASA in the aftermath of it’s two shuttle accidents, the 2010 Deepwater Horizon incident made it clear that the oil business has some cleaning up to do.

“The deeper we get in the ocean, the more similar the environment becomes to space – the hazards are very present, and the unknowns are there,” former NASA employee Tim Thornton told Pickrell. “You want to have hardware that can perform without you going down there.” Thornton says that technological advances in the oil industry outpaced their procedures, so now there’s some catch up to do.  “They were highly interested in the skills I had from the space program – this whole industry was missing a lot of things, and it was hard for them to develop it from within, so they said, ‘Let’s reach out to people who have these types of experiences, so they can help us change.’”

The oil industry has treasured its rough and tumble wild west image, but with costly spills biting into profits, some companies are finally seeing the light when it comes to choosing risk mitigation over seat-of-the-pants operations.

“They look at what may happen, instead of just producing the work, and that is something that other industries value,” says Veronica Reyes of former NASA employees. “That kind of contingency planning and awareness is hard to teach, but it is ingrained at NASA.” Reyes is a human resource manager at the Aerospace Transition Center which helps laid off aerospace employees find jobs in other industries.

Thornton’s not the only one to take the leap from space to oil. Former astronaut Jim Reilly started in the energy sector, and now he’s back to consulting in his first industry. Reilly says that the analysis that works for ISS also applies to oil rigs. “One of the things we always looked at on the space station was the range of possible outcomes if things went wrong – and whether that could kill you,” Reilly says. “It was a top-level threat we assessed, and then the next one was, could it kill the vehicle? Those were our critical two factors – if you had those – either one, then you had to build in triple redundancy.”

NASA veterans know how to follow procedures, constantly evaluate safety impacts, and already hold security clearance. With fewer than 20% of laid off NASA workers remaining in the aerospace industry according to some estimates, the oil industry may be one crowd applauding the retirement of the Space Shuttle.

NASA imagery below shows the progression of the Deepwater Horizon spill: