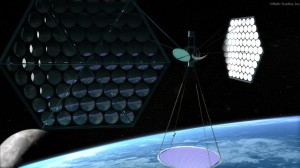 The National Space Society (NSS) announced a new international space solar power initiative at the International Space Development Conference (ISDC) 2013 in Washington DC. The NSS will found an international organization involving the United States, India, and other nations, which will be responsible for initiating space solar power activities.  These activities should support developing a technological solution to the world’s ever-surging energy requirements while greatly mitigating climate change through the reduction of CO2 created to produce energy.

“Time has arrived for us to together attempt to give a direction and momentum to this movement to realize space solar power and its enabling technologies through international collaboration that can help rebuild our environmentally vulnerable planet,” said Dr. A. P. J. Abdul Kalam, former Indian President and eminent scientist, and Mark Hopkins, chairman of the NSS’s executive committee in a joint statement to the media.

The solar arrays on a Space Solar Power satellite could generate energy from sunlight in space and transmit it wirelessly to Earth, which could provide a new source of clean energy to the power grids. Through this technology, large quantities of energy with little environmental impact could be provided through dedicated ground stations. Most importantly, the power available in space is the largest potential source of never-ending energy, as the lifetime of the Sun is estimated to be 4-5 billion years. The sustainable advantages of this source of energy are unlike that of oil, gas, and coal; space solar energy does not emit greenhouse gases.  Space based solar power has a ~95% exposure to the Sun, unlike their Earth-based counterparts. Compared with bio-diesel or bio-ethanol, solar power does not consume valuable farmland which could be used for food production. Solar power can be transmitted to almost any location on Earth, to meet the needs of the population across a wide area.

By delivering power to where the demand is, it prevents the need to build costly power generation facilities to accommodate peak demands and reduces the losses due to inefficient transportation of energy. Almost all spacecraft use solar power and there is enough clean power for any future power systems. The initiative promises to be incredibly costly and will require many years of development in order to make the concept feasible. The cost of launches that would be required to field the number of power generating satellites needed to replace a large coal powered powerplant  are at the moment, prohibitively expensive. To replace the world’s largest coal powered power plant (5780MW) with a space solar power satellite, and using the most efficient solar arrays produced to date (44% efficiency) would require an array with an area of 9.7km2 or 2705 times the size of the ISS solar array. This is of course ignoring losses in power transmission to Earth. In addition to the incredible size and mass which would be required  the power transmission problem would have to be solved for transferring the power from the satellite to the Earth’s surface. When transferring this much power the targeting and control must be guaranteed as safe to protect the population on the ground.

The formation of an international organization to forge forward in economic cooperation is not a new concept as only governments can assume the cost and risk of such a game changing organization. This was the mechanism which was put in place to commercialize satellite communications through organizations like Intelsat and Eutelsat. Both organizations have since gone private, operating fully commercially on a profitable basis.