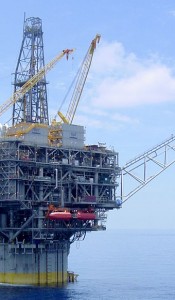 Groundbreaking new technology has recently resulted from collaborative efforts between NASA and Astro Technology Inc., a Houston, Texas-based oil and gas sensor and monitoring company, known for its deepwater Trident Subsea Systems. Notable previous designs include a fiber optic sensing system that can specifically withstand internal conditions of a solid-fuel rocket motor.  The newly developed fiber optic Tendon Tension Monitoring System (TTMS) will make off-shore drilling platforms safer for workers and coastal environments worldwide that are often damaged by rig accidents, including oil leaks, spills and explosions. Improving safety is a company goal, as they work to ensure the integrity of extreme condition equipment like risers and flowlines. The Clear Gulf Joint Industry Project (JIP) was initiated to share knowledge between the oil and space sectors.

Installed earlier this year, the system is being evaluated on two oil platforms in the Atlantic Ocean, off the coast of West Africa. Operationally, the TTMS functions to detect changes such as tension in the fiber-optic strain gauge system. Tension change can be subtle, caused by tides, docking and waves, or stronger if there is a storm. Subsea risers and pipelines are subject to these and other types of stress on the legs of the platforms and can be tracked via sensor clamps. TTMS can be monitored in real time with data streamed to operators ensuring a platform or riser’s stability. In a recent test, commercial divers secured 16 of the sensor clamps to the two drill platforms, connecting them to fiber optic data cables running to each platform’s control room.

TTMS is the result of a Space Act Agreement and has potential future applications in long-term human space exploration such as asteroid and lunar resource mining activities that would require real-time monitoring. Mining resources such as metal ore would promote structural manufacturing of habitats and spacecraft body frames in extraterrestrial mission locations.

The 2014 NASA budget proposal includes a $105 million jump-start robotic asteroid capture mission with a sampling mission to launch in 2016 using the Orion capsule. In addition to planetary exploration, the technology can be applied to deep space propulsion systems. Johnson Space Center Director Ellen Ochoa explains, “We need to be able to demonstrate capabilities that, as you add them up, allow you to get to Mars.” In order to do this, safely acquiring resources becomes increasingly vital the farther from Earth we travel.

Through other similar agreements, NASA is able to partner with companies in broader technical fields outside of NASA’s core capabilities. NASA’s aeronautics and space research, supported by partnerships such as that formed with Astro Technology, propels goals of space exploration by bringing new ideas to the table. Space Act Agreements are one way in which the US-space agency rises to new technical challenges in the pursuit of acquiring new skill sets and engineering data. NASA’s Chief Technologist, Mason Peck, summarizes this partnership by saying, “What we learn from testing this technology on the oil platforms will benefit a broad range of terrestrial and space applications, and shows NASA’s technology investments support America’s future in space and improves our lives here on Earth.”