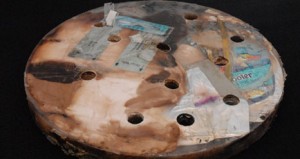 The trash discs currently in testing might be used for radiation protection (Credits: NASA).

It seems now that space debris considerations have entered the daily agenda of most space agencies worldwide, other environmental issues are slowly following. As noticed appreciatively by many “green” writers in the past weeks, NASA has embarked on a project that should develop a way to utilize garbage produced by astronauts in space.

Researchers at NASA’s Kennedy Space Center are currently testing special tiles made from garbage such as plastic bottles, old clothes, duct tape, and foil drink pouches that might be used in the future to add, for example, radiation shielding.  Nowadays, most of the trash produced at the International Space Station is simply loaded into automated transfer vehicles and left to burn during re-entry. Such a strategy would be impossible once a long-haul mission, such as to Mars or an asteroid, is considered. 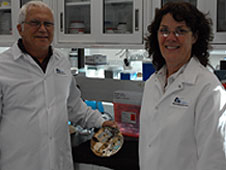 “We don’t want to contaminate the surface of an asteroid or something just by throwing the trash out the door,” said Richard Strayer, a microbiologist working on the project. “If NASA doesn’t do something about it, then the spacecraft will become like a landfill, with the astronauts adding trash to it every day.”

How does the system work? A special trash compactor developed at NASA Ames Research Center in California is used to heat the garbage for more than 3 hours at temperatures up to 180°C. Then, one tile is produced from one pound of material, reducing the volume of the garbage ten times. In general, to create one centimeter thick tile, 20 centimeters in diameter, one day’s accumulation of junk is needed.

The battery of tests currently being run should determine whether the tiles can be safely and efficiently used aboard the spacecraft. Microbiologist Mary Hummerick believes that all plastic packaging discarded by astronauts could have a second life in the form of radiation protection shielding: “If the time and temperature tests seem to be achieving what we want, we’ll go to long-range storage testing,” said Hummerick. “The mindset is, with limited resources, whatever you can use; you want to be able to repurpose that.” No doubt that such philosophy and technology would make supplying a future mission to Mars much smoother.

This experiment is definitely not the first “green effort” in space; the International Space Station is in fact one of the greenest buildings ever created. ISS generates all of its electricity through the solar panels and recycles all the water used at the station, including urine. Let’s hope that earthly buildings will soon follow the suit.

The following video highlights another green technology utilized at the ISS:
[youtube http://www.youtube.com/watch?v=XybQ4y6ntKs]