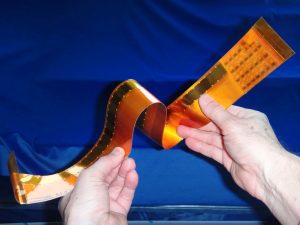 Piezoelectric foil, otherwise known as space foil, was designed for measuring pressure on the surface of spacecraft reentering Earth’s atmosphere. Now Volkswagen is using it to monitor the surface of a car during crash testing.

Space foil was developed in the 1990’s by a team of German enginers led by Paul Mirow. They needed a material that could map the pressure distribution on the wings of the Hermes spacecraft, intended as a reusable manned vehicle for launch aboard Ariane 5, but would not increase drag of the structure. They came up with space foil, which is thin, flexible, and works as a sensor, converting vibration and pressure into electrical impulses.“The piezoelectric foil is very thin, about 30 microns – a third of the thickness of a human hair,” explains Mirow. “You can just glue it to the surface, without creating any disturbances in the structure.”

When it comes to cars, the thinness and flexibiliy of space foil allows it to move and bend along with the surface of a crashed car, unlike more traditional sensors which are frequently destroyed in the impact. Volkswagon spotted the technology at a trade fair where Mirow had a stand organized by ESA’s Technology Transfer Programme Office. “The VW people asked, ‘is it possible to use this in crash tests?’” recalls Mirow. “We said, ‘let’s try.’”

“We wanted to know at which moment which parts of the car are deformed,” explained Jens Weinrich, an engineer at VW. “In a crash situation, it’s always a problem that you never know exactly what will happen.” Mirow’s company, Mirow Systemtechnik GmbH, customized the foil, creating a strip with 50 sensors and and a thin flexible printed circuit board at the end to record results.

Volkgswagon began studying the foil a few years ago and currently uses the data it collects to understand bend speeds and angles to better model crashes. They hope that the foil will provide the extra data needed to improve crash safety.

The video below shows a typical Volkswagon crash test: