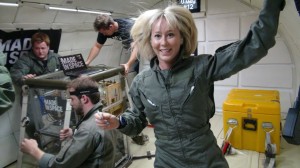 Made in Space tested the 3D printer technology on over 400 parabolas in 2011 (Credits: Made in Space).

The Los Angeles based company Made in Space have manufactured a 3D printer for use on the International Space Station (ISS), to be delivered in fall 2014.

“The future of space exploration will change forever when everything we need for space is built in space,” said Aaron Kemmer, Made in Space CEO. “In this future, parts, habitats and structures are not launched and assembled, but instead 3D-printed, layer-by-layer in outer space with additive manufacturing.”

The U.S. firm partnered with NASA’s Marshall Space Flight Center for the 3D Printing in Zero-G Experiment that is paving the way to allow a 3D printer to be launched to the ISS. The printer is scheduled to liftoff in one of the SpaceX’s Dragon resupply missions contracted with NASA. The opportunity came after Made in Space was awarded of a Phase 3 Small Business Innovation Research contract with NASA. The company has already tested the effects of microgravity on the technology in three parabolic flight campaigns allowed by NASA’s Flight Opportunities Program in 2011. Three different 3D printers were flown on a total of 400 parabolas to study the extrusion-based 3D printing method, and to research the fundamental physics of 3D printing in zero gravity.

The 3D printer will work using the Fused Deposition Modelling technique, building objects made of polymers and other materials layer by layer.  The blueprints of the objects will be loaded into a computer on ISS or uplinked from Earth. According to Kemmer, the ability to print parts and tools on demand will increase reliability and safety, reducing the cost and pushing forward the human presence in the solar system.

While 3D printers developed by Made in Space works layer by layer, two students of the Institute for Advanced Architecture of Catalonia in Barcelona, Petr Novikov and Saša Jokić are developing a new concept of 3D printers, with fibers instead of layers. According to Novikov, layer based techniques are not efficient and require more material, time and the presence of a support structure to properly operate. Their printer, called Anti-Gravity Object Modelling, doesn’t require a support structure because the material becomes solid as it comes out of the nozzle. According to the duo, the printer could work at zero gravity, however no actual tests have yet been conducted to demonstrate this.

In the meantime, Made in Space is also developing the Additive Manufacturing Facility, scheduled to arrive on the ISS in 2015. The production version of the manufacturing device will be used by space agencies and commercial companies, enabling among other things, the replacement of essential hardware and the ability to build science experiment apparatus directly on the ISS.