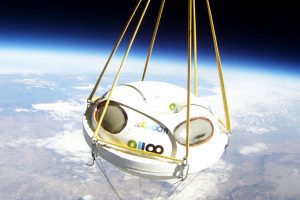 On November 12 the start up company Zero2infinity successfully tested a balloon that should be able to carry passengers to an altitude of 36 kilometers by 2014. During these balloon flights the space tourists could experience the near space environment with a breathtaking view of the Earth; furthermore, they could feel weightless like an astronaut. The balloon testing took place at an Air Force base near Virgen del Camino in Spain.

“You would spend two hours at the floating altitude of 36 kilometers (22 miles),” said José Mariano López-Urdiales founder and CEO of Zero 2 Infinity. “We could do it higher, but it would not make any difference, because you already see the same visual cues at 39 kilometers or even 100 kilometers.”

Felix Baumgartner, the stratospheric skydiver, jumped from 39 km which set the highest human balloon flight. The highest an unmanned balloon has travelled is 53 km. So while there is some room for an increase in altitude for crewed balloons, the increase is limited and would come no where near 100km, the unofficial limit of space, first defined by Australian legislation.

In the Zero2Infinity flight, the balloon would take several hours to reach an adequate altitude. From that altitude, reached after several hours of flight, the passengers could see the curvature of our planet and the sun rise against the blackness of space. On the way back down to the ground, the procedure would be to cut off the cable between the balloon and the passenger capsule. In this moment the people on board could experience weightlessness for 40 to 60 seconds during free fall, until the parachute opens. The capsule that was tested could carry two people, in a laying down position. For convenience the future version of the balloons, called “bloons” by the company, would have a bagel-shaped capsule to provide standing place for 6 people. “That’s probably the biggest benefit private spaceflight will offer to civilians and members of the public,” Lopez-Urdiales said. “The overview effect is personal experience, but then you share it. I think it goes a much longer way than bragging rights.” But for now López-Urdiales and his team are building another test balloon and capsule which could carry two people in an upright position.

The recently tested capsule carried a humanoid robot up to 32 kilometers and the Zero2infinity team will be analyzing the data from the flight for the coming months.

The number of interested customers for this extraordinary balloon adventure would seem to demonstrate considerable interest in space tourism, despite the ticket price of 110,000 Euros / person.  The company apparently has a long waiting list of potential customers, a number of whom have already paid a deposit of 10,000 Euros per person.

For those looking for a lower cost experience of freefall, the French National Centre for Space Studies (CNES) announced that Europe’s “Zero G” airplane will be offering commercial flights for paying customers as of March 15, 2013. Thus far there are three flights scheduled for 2013. Each of the flights will carry up to 40 passengers and have a flight time of 2.5 hours through a number of parabolas. The passengers will experience a total of 5 minutes of freefall throughout the parabolic flight, each cycle lasting approximately 30 seconds. Tickets are available for 5,980 Euros.