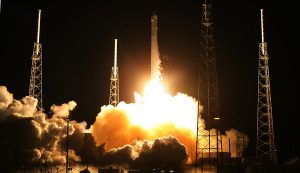 SpaceX’s Falcon 9 blasting off from Cape Canaveral on October 7, 2012. The launch was succesful although one of the nine engines failed just after takeoff (Credits: Red Huber).

On January 9, SpaceX announced its readiness to launch U.S. astronauts, employed by SpaceX itself, into orbit by 2015.

“We want to know when commercial companies are ready to fly their crew at their own risk,” said Ed Mango, manager of NASA’s commercial-crew program. The idea is for NASA’s commercial partners to demonstrate the safety and operability of the new craft on their own employees before the agency risks its astronauts.

SpaceX is now beginning internal discussions on the possible crew. The 2015 SpaceX demonstration flight, carried out with the Dragon capsule and launched by a Falcon 9 rocket, will be followed in 2016 by a similar mission planned by Boeing on its CST-100 capsule developed in collaboration with Bigelow Aerospace. In its first flight with astronauts onboard, the Dragon capsule would stay in space at least 3 days but would not dock with the International Space Station (ISS).

NASA has encouraged these commercial missions in order to reacquire US human space access, lost after the Space Shuttle was retired in 2011. Now relying only on Russian Soyuz to carry its astronauts to ISS,  NASA would hire the commercial launch companies as a “space taxi.” NASA is also contracting commercial companies to provide cargo to the space station. In October 2012, SpaceX delivered the first supply of cargo to the station and a second one is scheduled for March. However, even if the cargo was delivered successfully, the October launch was not flawless. One of the Falcon 9 rocket’s engine failed after takeoff. The result of the joint NASA/SpaceX investigation will be revealed soon, but the incident demonstrates that there is still work to do before these systems can be trusted to carry humans.

But for those who do not want to wait for their own space experience, AXE, a personal care product company, kicked off an online contest to send 22 winners on a suborbital flight. The lucky space travelers will be launched to an altitude of 100 km on XCOR Aerospace’s Lynx space plane, operated by the Space Expedition Corporation, a space tourism company based in Curacao, an island in the Carribean.

“Space travel for everyone is the next frontier in the human experience,” said Apollo 11 astronaut Buzz Aldrin, who teamed up with AXE to announce the initiative on Youtube. With a promised launch window sometime between 2013 and 2020, AXE astronauts may even beat their SpaceX counterparts to microgravity.