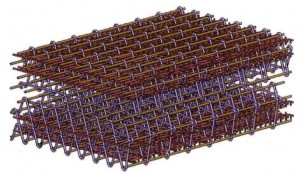 NASA’s Game Changing Technology Division is working with the textile industry to develop woven thermal protective systems (TPS). Similar to light weight three dimensional woven materials utilized in aircraft parts, this technology shows promise for heat shielding of spacecraft. “Woven TPS has the potential to significantly impact future NASA missions by changing heat shield development from a challenge to be overcome into a mission-enabling component,” said NASA Langley’s Ethiraj Venkatapathy, principal investigator of the project. “By delivering improved heat shield performance and affordability, this technology will impact all future exploration missions, from the robotic science missions to Mars, Venus and Saturn to the next generation of human missions,” Venkatapathy continued. The program, run out of NASA Ames in California in collaboration with NASA Langley Research Center in Virginia, is expected to produce a generation of shields able to handle extreme environments at more effective costs due to shorter development cycles. NASA’s chief technologist explains the game Changing Tehcnology program in the video below.