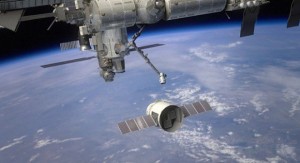 On January 4, ISS crew Commander Dan Burbank, Flight Engineer Don Petit and ESA astronaut Andre Kuiper held a media chat from onboard the Space Station. Among other topics, the astronauts discussed the upcoming arrival of the SpaceX Dragon capsule. Currently scheduled for launch on Feburary 7, the capsule will be the first commercial vehicle to deliver cargo to the ISS. “It is the start of a new era, having commercial vehicles that come to Station,” said Burbank.  Petit noted that the Dragon would make it possible to return sizeable cargo to Earth once again – something that has been impossible since NASA’s Shuttle was decomissioned last year. 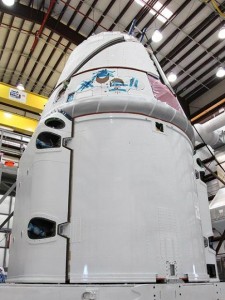 The Dragon spacecraft in final preparations for its February launch (Credits: SpaceX).

The Dragon will be docked manually, meaning the ISS astronauts will pilot a robotic arm to grab the capsule and insert it into the docking bay. “From the standpoint of a pilot it is a fun, interesting, very dynamic activity and we are very much looking forward to it,” Burbank said. Once the Dragon is fully qualified for cargo delivery, the next hurdle for SpaceX will be human flight qualification. Such qualification would alleviate a critical concern in the space community since the retirement of NASA’s Space Shuttle resulted in only a single vehicle, the Russian Soyuz, being qualified to conduct flights to and from ISS. With the Russian space agency recently under fire for multiple failures in the Soyuz line, pressure has been building to rapidly develop alternative capabilities. The Dragon will be performing two stages of qualification procedures on its trip – NASA’s Commercial Orbital Transportation Services COTS 2 and COTS 3. It will remain docked with the ISS for about a week before returning to Earth with a splashdown off the California Pacific coast. Watch the entire conversation with ISS crew in the video below: