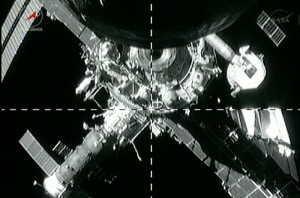 An image from the undocking operation of Progress 51 (Credits: Roscosmos)

The Progress 51 resupply craft has undocked from the Russian segment of the International Space Station (ISS) filled with trash, on June 11. The spacecraft, after a few days in free flight, will be destroyed during the re-entry into the atmosphere.

“The Progress 51 will orbit Earth at a safe distance from the station for a few days while controllers in Moscow perform engineering tests,” reported a station status update from NASA. “Afterwards, the cargo craft will re-enter the atmosphere over the Pacific Ocean for a fiery disposal.”

While Progress 51 was performing the undocking operation from the Zvezda module’s aft port, its external cameras investigated the condition of the Laser Radar Reflectors (LRR). LRRs are navigation sensors that are required for the precise approach and docking of Europe’s Autonomous Transfer Vehicle (ATV). One of the three LRRs present on the Zvezda’s aft port was presumed to be damaged, following the contact with a Progress’ stowed KURS antenna. Video from the Progress vehicle showed that the module docking ring surface appeared free of debris and telemetry indicated that the faulty antenna had deployed after the vehicle hook opening. The gathered imagery confirmed that the sensor was not damaged, therefore the new ATV-4, that is going to occupy the same port that hosted Progress 51, will dock according to the schedule, on June 15.

Progress 51 reached the ISS with 3.1 tons of food, fuel, and equipment on April 26. After the launch, the spacecraft suffered a failure in the deployment of one of the KURS navigational antennas. Russian flight controllers did not succeed in moving the antenna into the correct position, therefore a software patch was sent up to rectify properly the docking operation and Progress 51 finally berthed after a delay of  2 days.

In the meantime, ATV-4 is following a 10 day route that will bring the spacecraft to dock with the station, on June 15. The European spacecraft, named after Albert Einstein, was launched atop an Ariane 5 ES rocket from Kourou, on June 5.

Below, the video of the separation between Progress 51 and ISS.