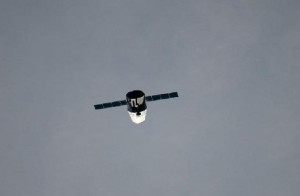 The SpaceX Dragon commercial cargo craft approaches the International Space Station on May 24, 2012 for a series of tests to clear it for its final rendezvous and grapple on May 25 (Credits: NASA).

The SpaceX Dragon unmanned spacecraft successfully docked with the International Space Station today, Friday 25, 2012, setting a milestone never before realized in spaceflight.  That milestone being that in a mere ten years, a private company began operations and developed a capsule and launch system that has now sent the same reverberations throughout the world as the beginning of the great space race between the United States and the Soviet Union.

The race now, however, is different.  This time the race is about free enterprise and while SpaceX is the early starter in this race there are others who are following behind.  The other entrants in the new commercial space race include such notables as Orbital Sciences, Virgin Galactic, Sierra Nevada, Alliant Techsystems and Boeing, which through its various adopted companies, including the former McDonnell Douglas, has been a major player under the former paradigm of government sponsored spaceflight.  The  goal in this new environment is not  geopolitical competition but rather free market competition.

China’s space program is viewed internally as a tool for global competition with the United States for geopolitical prestige and influence.  However, China’s space policies revolve around the paradigm of government sponsored spaceflight such that their program dovetails into the global competition with the United States.  However, the advent of commercial spaceflight is a game-changing shift from that dynamic and leaves China with the question of how its government sponsored program can compete with a free market based program that commercial space offers.  The question is whether China’s culture and internal dynamics allow them to shift their policy to compete directly with commercial space activities or will China will try to adapt its current paradigm to meet this new challenge.

The Greek philosopher Heraclitus said ‘Nothing endures but change.’  Clearly, as we recognize and celebrate the advent of commercial spaceflight with the historic docking of the Dragon with ISS, this quote holds true.  Throughout the history of spaceflight change has been small but incremental and those changes have slowly evolved spaceflight.  However, in order to take giant leaps bigger changes are necessary and today’s historic docking is one of those big changes for the better that will not only shape our perceptions of the world today but for decades to come.