NASA has been aware for over four decades that space flight is associated with visual acuity impairment, but for many years these visual changes were thought to be minor, transient and not accompanied by other symptoms or significant clinical findings. In 2012, they reported that 15 male astronauts, aged between 45 and 55 years of age, had experienced visual and anatomical changes during or after long-duration flights. The changes were not trivial, and included optic disc edema, globe flattening leading to hyperopic shifts, choroidal folds, retinal nerve fiber layer thickening, and increased intracranial pressure. Some astronauts experienced transient changes that resolved post-flight, but others reported persistent visual acuity changes with varying degrees of severity. Such cases aren’t just a worry for the astronaut, but also their fellow crew, ISS managers, and all of Earth’s space agencies – you can’t have astronauts suddenly becoming unable to read the dials. Something had to be done. Missions to Mars are unlikely to succeed with visually-impaired astronauts.

The syndrome, known as VIIP (Visual Impairment and Intracranial Pressure) is related to volume changes in the clear fluid that is found around the brain and spinal cord, according to new research recently presented at the annual meeting of the Radiological Society of North America (RSNA). Scientists previously believed that the primary source of the problem was a shift of vascular fluid toward the upper body that takes place when astronauts spend time in the microgravity of space. But researchers led by Dr. Alperin recently investigated another possible source for the problem: cerebrospinal fluid (CSF), the clear fluid that helps cushion the brain and spinal cord while circulating nutrients and removing waste materials. The CSF system is designed to accommodate significant changes in hydrostatic pressures, such as when a person rises from a lying to sitting or standing position. However, the microgravity of space presents new challenges. On earth, the CSF system is built to accommodate these pressure changes, but in space the system is confused by the lack of the posture-related pressure changes. 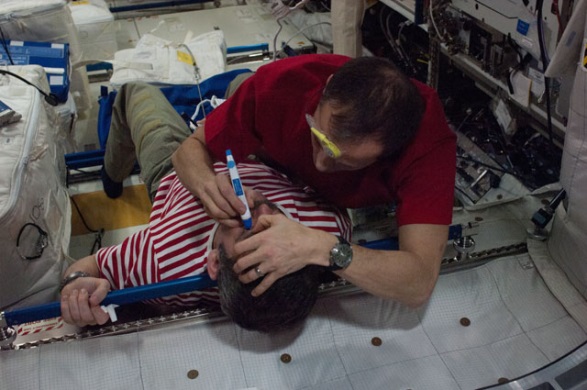 To learn more about the role of CSF in spaceflight-induced visual impairment and eye changes, Dr. Alperin and colleagues performed high-resolution orbit and brain MRI scans before and shortly after spaceflights for seven long-duration mission ISS astronauts. They compared results with those from nine short-duration mission space shuttle astronauts. Using advanced quantitative imaging algorithms, the researchers looked for any correlation between changes in CSF volumes and the structures of the visual system. The results showed that, compared to short-duration astronauts, long-duration astronauts had significantly increased post-flight flattening of their eyeballs and increased optic nerve protrusion. Long-duration astronauts also had significantly greater post-flight increases in orbital CSF volume, or the CSF around the optic nerves within the bony cavity of the skull that holds the eye, and ventricular CSF volume—volume in the cavities of the brain where CSF is produced. The large post-spaceflight ocular changes observed in ISS crew members were associated with greater increases in intraorbital and intracranial CSF volume.

The research provides, for the first time, quantitative evidence obtained from short- and long-duration astronauts pointing to the primary and direct role of the CSF in the globe deformations seen in astronauts with visual impairment syndrome. Identifying the origin of the space-induced ocular changes is necessary for the development of countermeasures to protect the crew from the ill effects of long-duration exposure to microgravity.

-This Human Research Program ‘Research to Outreach’ video featuring NASA Clinical Translational Scientist Jennifer Fogarty explains the risk of vision impairment both during and after spaceflight, its link to intracranial pressure, and the technologies NASA is evaluating for detecting intracranial pressure non-invasively. Credits: NASA