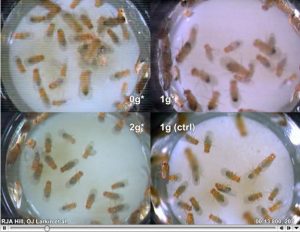 It seems ISS has a powerful and cheaper rival when it comes to attracting biological research. Scientists from University of Nottingham are using strong magnets to levitate fruit flies and simulate the effects weightlessness might have on them. “It’s also important to remember that, in our future endeavors to explore space, setting up permanent bases on our Moon, or Mars for example, or other planets, it will be crucial to understand the effects of weightlessness on all living organisms: our long-term survival will of course require us to take with us many different biological organisms,” said Dr. Hill. The team from Nottingham’s School of Physics, Astronomy and Biology utilized a strong superconducting magnet that is part of the University’s research facilities. They managed to create a magnetic field of around 16 Tesla which is approximately 350,000 times stronger than the strength of the Earth’s field. 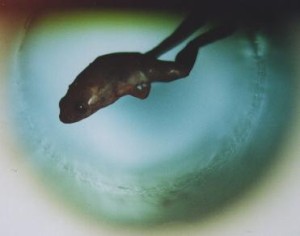 Frog levitating in a magnetic field (Credits: University of Nijmegen).

The diamagnetic repulsive force acting on the flies was strong enough to balance the force of gravity and therefore the flies levitated without any support. This effect has been demonstrated in the past by Andre Geim and his colleagues at the University of Nijmegen. Geim, now a Nobel Prize laureate, managed to levitate a living frog in 1997. “Crucially, as far as living organisms are concerned, the levitation force balances the force of gravity right down to the molecular level,” explained Dr. Hill. “This means we can compare the levitation force, which balances the force of gravity in our magnet, with the centrifugal force that balances the force of gravity on an astronaut in orbit around the Earth.” Aboard the ISS gravity is also still present, only neutralized by the centrifugal force, as the station orbits around the Earth. Even though diamagnetic levitation cannot neutralize gravity as well as real weightlessness, it can serve as a cheaper and easier substitution. The reasons for changes in the motion of the flies are not known. One possible explanation is that the flies feel less pressure on their joints and muscles, which enables them to move faster. The video below shows the flies levitated by magnets. [youtube http://www.youtube.com/watch?v=-aiqv2xou5c&w=420&h=315]