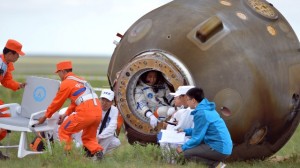 Shenzhou 10 brought back more than its crew from space. The capsule carried Chinese Medicine seeds, irradiated in the hopes of improving potency and speed of growth (Credits: CNN).

Continuing a decades-old practice, the crew of Shenzhou 10 carried with them seeds of the Amur Cork tree and Atractylodes chinensis. The two plants are common ingredients in Traditional Chinese Medicine (TCM); the goal of carrying them to space was to induce mutations to make them grow faster.

While plant studies are ubiquitous on space missions, they are mostly geared toward understanding how the absence of gravity and diurnal cycles affect plant growth. While there have been a few US and Russian experiments looking at increased mutation rates, those experiments are generally conducted on plants not intended for consumption. China, on the other hand, has consistently used radiation from space-exposed seeds to speed up genetic selection of favorable characteristics.

The seeds from Shenzhou 10 are being cultivated by the Chengde Jingfukang Pharmaceutical Group, a process that can take four to six years. They hope to develop variants that are more potent with a shorter growth cycle to “bring relief to any supply shortage,” as Xinhua quotes company chairman  Li Shenming as saying.

Amur cork is a fairly robust species, recognized as an invasive species in much of the world. Its bark is used to extract huáng bò one of the 50 fundamental herbs in TCM. The root of Atractylodes chinensis, along with several other subspecies, is baked to produce cāng zhú, thought ward off dampness.