All spaceflight relies on fire. Combustion provides the force which sends every spacecraft into orbit. Anyone who has watched a rocket launch can attest to the feeling of near-awe inspired by the sight, smell, and feel of that massive firepower harnessed to the will of human intellect. But spaceflight is also predicated on small, enclosed pockets of livable environments, uniquely vulnerable to disruption and irreplaceable once destroyed. When fire breaks out in one of these carefully designed pockets, it can turn deadly very quickly indeed. 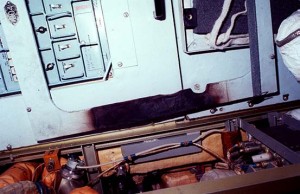 Burnt panel in Mir after the fire (Credits: NASA).

There has been only one notable fire in space – at least of the accidental variety.  It occurred aboard the Russian space station Mir in 1997 when an oxygen-producing chemical canister ignited. Supplied with ample oxygen, the spark rapidly developed into an all-out blow torch and came awfully close to catastrophic. The six cosmonauts and astronauts onboard eventually extinguished the flame and life support systems cleared the smoke, so no permanent damage was done to the crew. Sadly, the same cannot be said of the fires that took hold on the way to space.

In 1961 cosmonaut Valentin Bondarenko died as he wrapped up a training exercise in an isolation pressure chamber in an incident that did not become public until 1986. The 24 year old was removing biomedical sensors, using rubbing alcohol to clean the remaining adhesive from his skin. In a seemingly trivial act, Bondarenko tossed away a cotton ball soaked in alcohol he had been using. It landed on his hot plate, instantly catching fire. The pressure chamber was fill with 68% oxygen – much higher than the 20% of Earth’s atmosphere. Bondarenko had been in the chamber for ten days, and everything from his clothes to his equipment was oxygen-saturated. Despite his efforts to smother the flames, Bondarenko and everything in the chamber quickly caught fire – only the soles of his feet were protected by his heavy flight boots. By the time monitors were able to open the pressurized door, there was nothing anyone could do. Bondarenko survived most of a day before dying of shock.

Some believe that knowledge of Bondarenko’s fate could have prevented NASA’s first fatalities, but that seems unlikely. There was a nearly identical example much closer to home in the form of  the near-fatal 1962 fire in a 100% oxygen simulator survived by two Air Force pilots while testing Gemini spacesuits for NASA; the incident does not appear to have been taken into consideration when planning Apollo 1’s environment. On January 27, 1967, Gus Grissom, Ed White, and Roger Chaffee were sitting in the Apollo 1 command capsule performing a plugs-out (detached umbilicals) test on the launch pad at Cape Kennedy. The cabin environment was 100% oxygen at a pressure of 16.7 psi. There were some good reasons for using these conditions, but not good enough. The pressurized oxygen environment increased the flammability of many materials inside the capsule, such as the velcro-covered walls. It also instantly ignited when an electrical arc erupted from sloppy and stressed wiring. The crew died of asphyxiation. Luckily, many of the burns that melted the astronauts’ suits to the seats and floor did not occur until after their deaths.

Ironically, the conditions established during this test were rooted in decisions made to reduce risk. The oxygen atmosphere was chosen to prevent decompression sickness, a real danger when operating in lower pressures and one which still requires careful management today. It was also intended to prevent repetition of a 1960 accident in which a test pilot passed out when too much nitrogen leaked into his air feed – by eliminating the nitrogen, NASA could prevent repetition of such a mechanical failure. The hatch was designed to open inward – which made escape in the pressurized environment impossible – out of fear it might otherwise open accidentally, venting the module and killing its inhabitants. 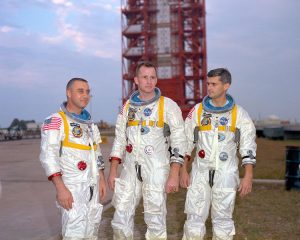 The crew of Apollo 1 (Credits: NASA).

This is not to say that there were not mistakes made – and serious ones – in the lead up to the Apollo 1 fire. Although there were certainly some manufacturing issues, the biggest issue was the failure to adequately evaluate the safety of the plugs-out testing conditions, not just the safety of the anticipated flight conditions. This is no small matter: the pressure of the capsule during the test was elevated more than 11 psi above actual post-launch operating conditions. This was done to create a pressure differential from inside the capsule to outside the capsule, adjusting for the external atmosphere instead of space’s external vacuum. It also made sure that any ambient nitrogen was evacuated, so that when the pressure was dropped post launch, the crew did not experience decompression sickness. While it is necessary to make sure spacecraft and their crews can withstand expected pressure differentials, NASA officials missed an important step when they failed to evaluate the safety of the ground conditions, to designate the test as potentially hazardous (despite the lack of pyrotechnics), and adjust accordingly.

On January 27 every year, we remember the astronauts who died in the Apollo 1 fire and begin the long week of anniversaries of NASA ‘s fatal tragedies. We also try to recall the factors that led to those fatalities, to ensure that  they are never repeated. Apollo 1 holds many lessons of continuing relevance, not least of which is how hard it is to remember all the relevant histories, to learn the right lessons, and to apply them wisely.