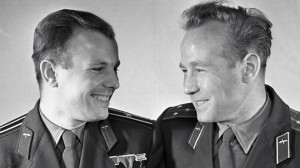 Yuri Gagarin became the first man to fly in space on April 12, 1961 when he road Vostok 1 into history. Gagarin became an instant celebrity, and is still hailed world-round for his accomplishment.

With all that attention, Gagarin’s premature death in a routine fighter jet training flight is all the more surprising in that first the USSR, then Russia was able to keep it under wraps for so long. Until June 14, all Gagarin’s fans could do was speculate.

On June 14, 2013, RT News published an interview with Gagarin’s friend and fellow cosmonaut Aleksey Leonov. After decades of requests and pursuit of his own investigations, Leonov, who was the first man to conduct a spacewalk, was given access to the official investigation report this month – and permission to talk about it. Here is what happened on March 27, 1968.

Gagarin, who had not flown regularly in some years, was recertifying to become a fighter pilot. Some thought that he had lost his edge in the intervening years, taking to heavy drinking and womanizing, somewhat overwhelmed with his fame. He was getting back to business in 1968, however, and on March 27 he accompanied flight instructor  Vladimir Seryogin on a  MiG-15UTI test flight. It was a windy, rainy, snowy day at Chkalovsky Air Base, with poor visibility. Gagarin and Seryogin had radioed in that their test run was completed – a series of simple turns, pitches, and nose dives. Minutes later, Leonov, who was scheduled to conduct parachute jump training at the base, heard “a sonic spike, a blast, followed by one-and-a-half or two seconds of supersonic noise.” On returning to base, he learned that Gagarin’s plane had crashed. Gagarin’s body was not found until the next day, sparking some initial hope that he had ejected and survived. Seryogin ‘s body was found near the remains of the plane.

As the investigation unfolded, the official story of the incident became clear: Gagarin had had a bird strike, or similar projectile event, and gone into a spin. They had been given incorrect weather data, and so were flying at a dangerous altitude. There was even some mention of outboard fuel tanks being improperly attached to the plane. Or so said the State Commission. There were very few who believed the official story. As Leonov told RT, “That conclusion is believable to a civilian – not to a professional.” It was clear that something was being covered up, but what?

One common rumor held that Gagarin was intoxicated during the flight, or that his piloting skills had so seriously slipped that he was unable to handle the craft properly. Another story held that there was an air vent left improperly opened that caused the pilots’ deaths through asphyxiation or loss of consciousness when they conducted an emergency dive to return to breathable airspace. Every once in a while, the Russian government would release a new tidbit of information, making it clear that there was a story to be told, but not what that story might be.

With Leonov’s examination of the official investigation record, the veil appears to be lifted. Gagarin did die when his plane went into a spin, but it was certainly  through no fault of his own – and no birds were involved. “…a jet can sink into a deep spiral if a larger, heavier aircraft passes by too close and flips it over with its backwash. And that is exactly what happened to Gagarin,” explains Leonov. It turns out that, in a clear violation of the rules, a Su-15 jet whizzed right by Gagarin’s plane. “While afterburning, the aircraft reduced its echelon at a distance of 10-15 meters in the clouds, passing close to Gagarin, turning his plane and thus sending it into a tailspin – a deep spiral, to be precise – at a speed of 750 kilometers per hour,” recounts Leonov. “We knew that a Su-15 was scheduled to be tested that day, but it was supposed to be flying at the altitude of 10,000 meters or higher, not 450-500 meters. It was a violation of the flight procedure.”

Leonov was granted permission to go public with these findings on condition that he not reveal the identity of the Su-15 pilot, who was completely unaware of his proximity to the space legend whose death he caused, and who is now an ailing octogenarian.

And that appears to be that. 45 years after Gagarin’s death, we now know what killed him.

This documentary report of Gagarin’s death was broadcast in 2010, before this month’s reveal: