Smokey the Bear is a symbol of fire safety across the United States. For decade, he has warned the public, especially children, of the dangers of wildfires and how to prevent them. Now, he can do so from space, following his May 15 launch to the International Space Station in the company of Expedition 31 crew. Smokey is the mascot of the US Forest Service, known by his motto “Only you can prevent wildfires.” This is the first time Smokey has been to space, although he was lofted aboard a weather balloon in May 2011, reaching an altitude of 30,480 meters.  He will turn 68 while onboard ISS on August 9. 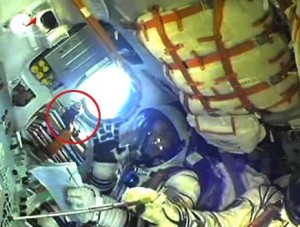 A plush Smokey the Bear in Expedition 31 Soyuz (Credits: NASA).

The Smokey doll that launched aboard the Expedition 31 Soyuz belongs to NASA astronaut Joe Acaba. Acaba is a former school teacher, a geologist, and avid outdoorsman. Usually, the Russian commander provides a small doll or stuffed animal as a launch mascot and “zero-G indicator.” For instance, cosmonaut Anton Shkaplerov launched with a plush Angry Bird  belonging to his daughter. NASA astronaut Don Pettit later used the bird, a character from a popular video game, for one of his microgravity physics demonstrations. Although tradiationally it is the right of the Soyuz commander to provide the mascot, in this instance cosmonaut Grennady Pedalka ceded the honor to Acaba. Acaba’s bear was a gift from a friend who works in the US Forest Service. “Smokey is a very famous icon in the United States,” Acaba explained to a Russian journalist. “He’s been around since the 1940s and tries to remind us about what the problems are when you have human-caused fires and tries to remind us to protect the environment as well as we can.” Fire safety is critical in space as well as on Earth. A fire in space can be difficult to extinguish and its smoke cannot be dissipated by simply opening a window. The Flame Extinguishing Experiment (FLEX) aboard ISS could develop better ways to put out a fire aboard a spacecraft, such as occurred on the Mir station in 1997. The Smoke Aerosol Measurement Experiment (SAME) project aboard ISS looks to advance smoke detection on the station. Smokey is a reminder of the importance these initiatives as well as an education tool to raise awareness of fire safety on Earth. Below is a typical public service message from Smokey the Bear: