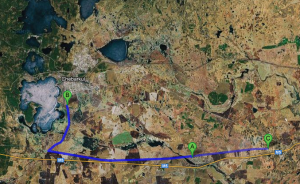 This Google Map image shows the expected landing sites of individual fragments of the Russian meteorite as calculated by astronomer Pavel Spurny and his colleagues. B is the town of Chebarkul where the biggest fragment landed, A is the village of Travniki and Shchapino (Credits: Google Maps).

On February 23, the International Astronomical Union (IAU) published the first calculations of the detailed trajectory, landing masses of individual pieces, and expected landing sites of the fragments of the Russian Meteorite that crashed down near Chelyabinsk on February 15, 2013. The report was published in the IAU’s Electronic Telegram No. 3423. This service is only available to registered members of the IAU.

However, Space Safety Magazine can reveal that according to the results obtained by a team of astronomers from the Czech Republic, the largest fragment that landed in Lake Chebarkul is expected to weigh between 200 – 500 kg. One or two smaller fragments of several tens of kg can be expected near a village called Travniki, approximately 10 kilometers east from the lake. A 1kg fragment was found further east near a village called Shchapino and additional small fragments are expected about 5 kilometers to the south.

The object that caused the event was probably rather fragile and started fragmenting at an altitude of 32 kilometers above the Earth’s surface. The Czech team calculated that the observable trajectory was 254 km long with an azimuth of 279.5 degrees and inclined 16.5 degrees to the horizontal. 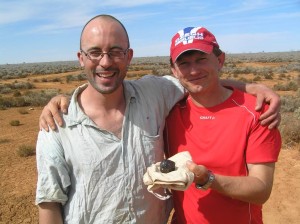 Astronomer Pavel Spurny (on the right) and his colleague Phil Blund after recovering the Australian meteorite Bunburra Rockhole (Credits: Astro.cz)

To perform the calculations, the astronomers used 7 casual video records calibrated with Google maps tools. The leader of the team, astronomer Pavel Spurny, said about the team’s success: “We had to select suitable video records and calibrate them without actually knowing the situation on site. It was really complicated.”

The scientists also managed to determine that the major blast that resulted in severe damage and injuries of more than 1500 people in the Chelyabinsk area took place at an altitude between 25 and 30 kilometers. The original report also contains calculations of the orbit of the object in the solar system prior to the collision with the Earth.

Spurny and his team of professional meteorite hunters are now in touch with their Russian counterparts, trying to extract more data from video recordings of the event.