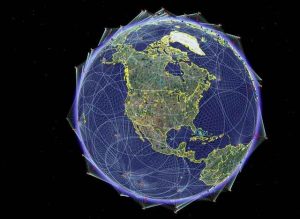 A group of German hackers from Stuttgart is aspiring to build an independent, fully operational space program, in order to provide uncensored internet to users all over the world. The Hackerspace Global Grid (HGG) is an attempt to form a “Hacker Space Program” and was founded by hackers, tinkerers, and part time scientists interested in the technological aspects of such a project. Participants were inspired by a call to action at the Chaos Communication Camp in August 2011 by hacker activist Nick Farr. Although Farr was motivated by legislation enabling censorship from governments and corporations, such as the Stop Online Piracy Act (SOPA), HGG has distanced itself from anti-SOPA activity. HGG’s goal is to provide satellite based communication to the hacker community and to put a hacker on the Moon by 2034. Their plan consists of building a distributed network of ground stations  with the first goal being to  build the necessary network system software and infrastructure and achieve accurate synchronization. HGG plans to provide the ground stations for only 100 euros, and to deploy three of them in 2012. Initially HGG plans to utilize already orbiting satellites, such as the independent satellites used by ham radio operators. 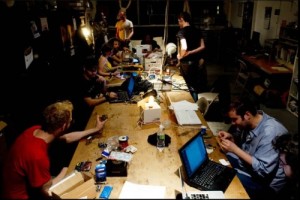 The degree of difficulty of creating a space program remains extremely high, but in the near future it should be quite possible for amateurs to reach Low Earth Orbit (LEO), possibly by piggybacking on other satellite launches or ISS resupply runs. DIY space activities, such as those of Copenhagen Suborbital, are becoming more common as the basic technology needed becomes more widely available. The biggest problem HGG will encounter is selecting optimal placement of their satellites. In LEO,  satellites move too fast to be used for providing internet data to the ground, while in a higher orbit the signal lag would create significant limitations on potential applications . The regulatory gaps in space’s legal regime add more complications to HGG’s project, since there would be no legal repercussions should a country decided to neutralize HGG’s satellites and stop them from streaming uncensored internet inside the country’s borders. Despite these difficulties, there is reason to believe that an amateur space program created by hackers would be accepted with excitement by a majority of the public around the world, and not only the tech-savvy minority of DIY hobbyists and space enthusiasts. Free flowing information broadcast by open source satellite communications would secure the position of free internet, a tool that proved its value in the recent Arab spring uprisings, and would be welcomed by citizens of oppressive regimes around the world. However, such a tool could also be used for criminal purposes – piracy, identity theft, and copyright infringement. Investigation of such activities could become very difficult under such an institution. The video below is an animated news story on HGG (Credits: NMA World Edition): [youtube http://www.youtube.com/watch?v=k0cvwMF9Fy0]