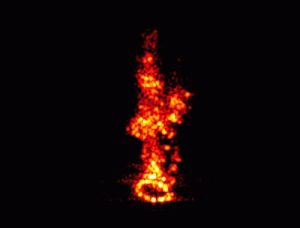 Radar image of the Phobos-Grunt probe in Earth orbit prior to its January15 plunge (Credits: Fraunhofer FHR).

Almost three months since the launch of Phobos-Grunt and fifteen days since the ill-fated spacecraft returned to Earth after being stranded in orbit, the chronicle of the mission endures and has yet to come to a conclusion.  During the telling of the tale, speculation about the spacecraft has run unbridled with conjecture relating to the technical aspects concerning the failure and conspiracy theories about the influence of external forces that may have caused the failure.

The saga also includes a chapter concerning the final resting place of the spacecraft’s remains, which has an added addendum in the form of a recent op-ed.  While the reported rested place of the remains of the spacecraft has been extrapolated by a combined effort of ESA, the Russian Federal Space Agency and United States Strategic Command’s Joint-Space Operations Center to be in the Pacific Ocean some 700 miles west of the South American coast, according to the op-ed by James Oberg, some of the heaviest pieces of debris could have landed in Chile and possibly Argentina.

The op-ed by Mr. Olberg suggests that among the items that could have survived and reached land are the life capsule experiments from the Planetary Society and the Russian Federation.  The op-ed also speculates that while most of the propellant was contained in aluminium tanks, which would have allowed the propellant contained within to disperse during reentry, some of the smaller tanks on the spacecraft may have been constructed of titanium and could have survived reentry intact with its propellant surviving.    However, until debris from the spacecraft is recovered and identified, this too will remain part of the conjecture surrounding the saga of Phobos-Grunt.

On the other hand, with the release of the report on the potential cause of the spacecraft’s failure, perhaps some of the story will come to an end.  Vladimir Popovkin, head of the Russian Federal Space Agency, Roscosmos, presented the commission report on the failure Monday night.  Officials haven’t publicly spoken to its content as of yet, but some details have been made public via unofficial sources.

Anatoly Zak at the Russian Space Web posted that an unidentified source in the  Russian space industry leaked critical details about the investigation into Phobos-Grunt’s failure.  According to the source, the failure of the spacecraft was due to design flaws in the spacecraft itself, which went undiscovered due to insufficient testing prior to launch.  The source goes on to say the theory that the spacecraft’s computer could have been influenced from outside sources such as the alleged interference from a radar operated by the United States or a solar flare has been discredited.  NPO Lavochkin, the bureau that designed and built Phobos-Grunt, conducted a series of tests that proved Phobos-Grunt’s computer could withstand and function normally despite interference from not only the spacecraft’s own power supply but from external sources such as ground radar operated by the United States.

As the report released by Roscosmos is scrutinized, perhaps the chapter of the failure will finally be closed and with it part of the enduring saga of Phobos-Grunt will be put to rest.  For other aspects of the story, however, the speculation surrounding the spacecraft will continue and with it the saga of the ill-fated mission.  More so, in spite of present and future evidence to the contrary, the mystery of Phobos-Grunt may continue to be perpetuated giving enduring life to its saga.