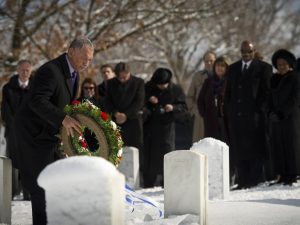 NASA Adminstrator Charles Bolden laid a wreath in a ceremony at Arlington National Cemetry in honor of every astronaut who lost a life aboard Apollo 1, Challenger, and Columbia (Credits: NASA).

January 27 is set aside as a Day of Remembrance at NASA, a time to remember those who gave their lives in the quest for space exploration. The astronauts of Apollo 1 and space shuttles Challenger and Columbia are honored for their sacrifices.

Apollo 1 Fire: Astronauts Gus Grissom, Ed White, and Roger Chafee were on the launch pad on January 27, 1967 when a fire broke out inside their Apollo capsule. The accident led to major design and engineering changes to the Apollo capsule, enabling it to safely delivery astronauts to the moon on later missions. All three astronauts lost their lives.

The Challenger Explosion: Astronauts Francis Scobee, Michael Smith, Judith Resnik, Ellison Onizuka, Ronald McNair, Gregory Jarvis, and teacher Sharon Christa McAuliffe had just launched aboard the Challenger space shuttle on January 28, 1986 when a booster enginer failed, breaking apart the shuttle and killing everyone on board. The voice recorder aboard the shuttle recorded a single “Uh oh” from Pilot Smith before losing all data. The cause of the accident was primarily attributed to a problem with an O-ring in the solid rocket booster joint and insufficient testing for launch conditions under the abnormally low temperatures the day of the flight.

The Space Shuttle Columbia Disaster: Astronauts Rick Husband, William McCool, Michael Anderson, Ilan Ramon, Kalpana Chawla, David Brown, and Laurel Salton Clark were 15 minutes from landing at the end of their 17 day scientific mission on February 1, 2003 when mission control lost contact with Columbia. The shuttle broke up on reentry, killing all aboard. The cause of the columbia accident was attributed to a piece of foam having fallen off an external tank and punching a hole in Columbia’s left wing. Shuttle flights since Columbia have undergone extensive tile integrity assessment, including pre-reentry visual review.

In an address following the Columbia accident, then U.S. President Bush said “mankind is led into the darkness beyond our world by the inspiration of discovery and the longing to understand. Our journey into space will go on.”

The video below honors the memory of these astronauts.