At the end of 2017, Elsevier published the IAASS book “Space Safety and Human Performance“. The book preparation started after the terrible accident of Virgin Galactic SpaceShipTwo of 2014 that was caused by a single human error. The first case in 60 years of human spaceflight!  The report of the NTSB (National Transportation Safety Board) on the results of the investigation made, among others, the following recommendation about the importance of human factors:

The NTSB concludes that human factors should be emphasized in the design, operational procedures, hazard analysis, and flight crew simulator training for a commercial space vehicle to reduce the possibility that human error during operations could lead to a catastrophic event. Therefore, the NTSB recommends that the FAA, in collaboration with the Commercial Spaceflight Federation, develop and issue human factors guidance for operators to use throughout the design and operation of a crewed vehicle. The guidance should address, but not be limited to, the human factors issues identified during the SS2 accident investigation. Specifically, the guidance should include, but not be limited to, information on obtaining human factors expertise, considering human error in hazard analyses, ensuring that hazard analyses avoid or adequately mitigate single-point failures, performing simulator training in actual flight gear for full mission profiles, using existing human factors guidance from other related industries, and providing awareness and documentation to flight crews of known catastrophic hazards that could result from human error.

Expanding on the scope of the NTSB recommendation, the IAASS human factors committee decided to develop a textbook, also addressing the issues of future long-duration missions and the impact of increasing automation, as educational resource for university students and guidance for engineers and managers working in space programs.

Human performance can either degrade or enhance systems safety. There are several well-established design solutions and operational techniques that help preventing and mitigating human errors, but in space operations there are additional important factors to consider. During spaceflight, human performance can be deeply affected by physical, psychological and psychosocial stressors. Strict selection, intensive training and adequate operational requirements are used then to fight performance degradation and to prepare individuals and teams to effectively manage systems failures and challenging emergencies.

The IAASS book Space Safety and Human Performance has been a great success. Last week it was nominated for the annual book award of the Aerospace Human Factors Association. The nomination follows the winning of the PROSE Award 2019 of the AAP (Association of American Publishers) as best book in the field of Engineering & Technology, and of the IAA (International Academy of Astronautics) award as best Life Sciences book of 2018. 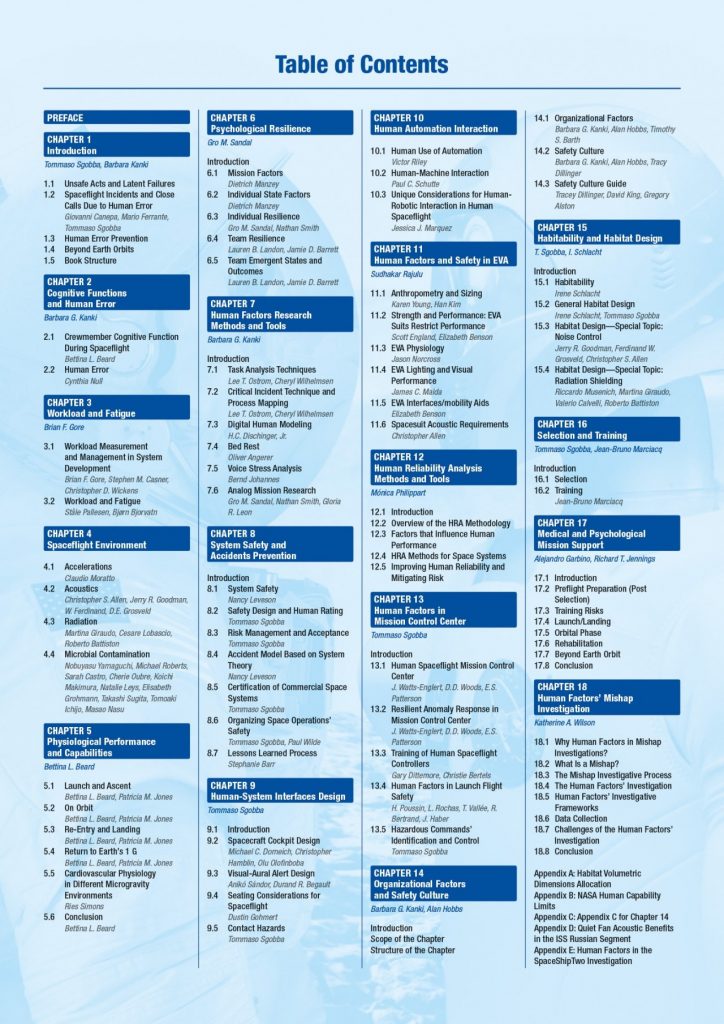 The IAASS book “Space Safety and Human Performance” is dedicated to the memory of Michael Alsbury, copilot of VG SpaceShipTwo who was killed in the accident.