Within seconds of Virgin Galactic’s SpaceShipTwo breaking up above the Mojave Desert, pilot Peter Siebold was free falling to Earth. His survival can be considered a miracle, considering the many dangers he was exposed to during his fall.

While the nitty gritty details of the accident remain under investigation, the various moments of Siebold’s near-death experience can be extrapolated from general knowledge of physics and decades of space and aviation accidents. Find them below.

Rapid Or Explosive Decompression In A Near-Vacuum Environment 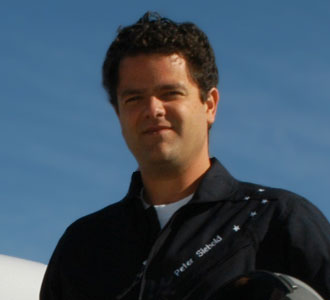 Every time you open a bottle of soda, you witness a minute fraction of what Siebold and Alsbury experienced during the October 31 accident. In one of the most commonly referenced analogies to decompression, the pressurized carbon dioxide-rich liquid inside a soda bottle is suddenly exposed to a lower pressure environment at the twist of the cap and POP goes the marketable sound of gas escaping and PFFZZ goes the froth.

A human body works on the same principle: the body, like the liquid in the pressurized bottle, will always seek equilibrium with its environment. During aviation ascent, the body’s pressurized cavities that contain free-moving gas like the lungs, ears, and stomach seek to establish equilibrium by escaping into the proportionately lower-pressure environment – the artificially pressurized cabin. We feel this in the popping sensation in our ears and, less noticeably, abdominal discomfort from the expansion of gas in our stomachs.

In the educational video below, effects of expanding

If the cabin was not artificially pressurized, our bodies would be doing a lot more expanding, or decompressing. In the early 20th century, pilots achieved altitudes of 12 kilometers without artificially pressurized cabins but suffered enlarged hearts and health problems afterwards. At cruising altitude for a commercial flight—around 11 to 12 kilometers above sea level— air pressure in the cabin is artificially pressurized to equal the air pressure you would find at 1.8 to 2.4 kilometers (about one-fifth the height of Mt. Everest). This is a compromise that provides a comfortable atmosphere for the passengers without over-pressurizing the cabin itself. Keeping the pressure equivalent to pressure at sea level, after all, would require a thicker, heavier hull, or it would be at risk of rupturing.

When SpaceShipTwo broke apart in the sky at about 15 km above sea level, Siebold’s body was immediately exposed to a dangerously dramatic variation in pressure (not to mention extreme cold of about 56 degrees Celsius below zero!). Air pressure at that altitude is between 2.5 and 18 percent of the pressure it is at sea level. In other words, Siebold was relatively close to experiencing a vacuum environment. We can assume, then, that Siebold experienced explosive or rapid decompression (The Federal Aviation Administration defines explosive decompression as any decompression that occurs within less than half a second and rapid decompression as a change in cabin pressure where the lungs can decompress faster than the ambient atmosphere).

It is well-known that exposure to a vacuum environment will not cause the body to explode. Based on what we know about the body, however, we can assume that Siebold, even for a few microscopic moments, was in danger of suffering lung trauma when the high-pressure gas inside his lungs sought to escape into the extremely low-pressure environment. The FAA states that explosive decompression “often results in lung damage,” a point further explored by Dr. Michael Barratt and Dr. Sam Pool explain in the 2008 publication Principles of Clinical Medicine for Space Flight:

“The lungs are one of the most vulnerable organs during rapid decompression. Whenever a rapid decompression exceeds the inherent capability of the lungs to evacuate gas, a transient positive pressure will temporarily build up in the lungs relative to the ambient atmosphere. If the escape of air from the lungs is blocked or seriously impeded during a sudden drop in cabin pressure, intrapulmonary pressure can rise rapidly enough to rupture lung tissues and capillaries.”

Geoffrey Landis, a NASA scientist, says in his website that any blocked or trapped air in lungs can result in ruptured blood vessels and massive air bubbles moving throughout the body that can lodge in the heart, brain, and other vital organs.

In 1968, Dr. Douglas Busby offered perspective on the risk of lung trauma in his well-referenced publication, Space Clinical Medicine:

“Fortunately the probability that an astronaut’s respiratory passages could be obstructed and hence overdistended by trapped intrapulmonary gases at the instant of an ‘explosive’ decompression is very remote. Moreover, it appears that patent airways will allow an adequate escape of expanding gases under all but the most extreme of conditions.”

NTSB has not released any details of Siebold’s medical condition after the accident other than his injured shoulder, so we cannot know if Siebold experienced any long-term damage to his lungs or other vital organs.

Below, an educational video by SciShow about body exposure to vacuum.

“In the unlikely event of a sudden loss of cabin pressure, oxygen masks will deploy.” If you’ve ever been on a plane, you’ve heard something similar. That’s because one of the greatest risks associated with decompression, whether it is explosive or gradual, is starving to death from lack of oxygen. This condition is called hypoxia, specifically—in the case of rising altitude—hypoxemic hypoxia.

The amount of oxygen we inhale at a particular altitude is measured by calculating the oxygen’s “partial pressure,” where “partial” refers to the fact that oxygen is not the only component of the gas mixture inside our alveoli (the gas mixture’s total pressure is the sum of the partial pressures of each individual gas).

The partial pressure of oxygen in the alveoli is 14 percent at sea level, and then diminishes with altitude as pressure decreases. That’s because the partial pressure of oxygen in the ambient atmosphere also decreases. So when we inhale at higher altitude, we take in oxygen that is less compressed and less pressurized than what our bodies are used to. We no longer need to take in as much oxygen for the pressure in our lungs to be equal with the ambient atmosphere. But our bodies love oxygen. Taking in less oxygen may satisfy the body’s intrinsic need for equilibrium, but taken to the extreme it may starve our brains.

That’s when the hypoxic symptoms set in: impaired vision, impaired judgment and motor skills, slurred speech, memory loss, difficulty concentrating, over confidence, and so on. It has many times been likened to feeling a happy kind of drunk. You might even pass out. And if you don’t remedy your situation, you could even die.

According to the FAA, the onset of hypoxic symptoms could occur in an unpressurized aircraft as low as 12 to 15 km. At 18 km, the FAA says the ability to take corrective measures—the “time of useful consciousness”—diminishes in 10 to 15 minutes. We know SpaceShipTwo broke up at 15 km and ejected Siebold into the sky, so we can assume it would have taken at least 15 minutes at this altitude before he would have passed out from hypoxia.

The NTSB reported Siebold unbuckled his seatbelt “at some point” after ejection before his parachute automatically deployed. It is unclear from the report whether Siebold was fully conscious of his action. Some news reports say he lost consciousness and then regained it during his fall, giving a passing airplane a “thumbs up.” An NTSB official confirmed to Space Safety Magazine that NTSB had never released information that confirms this point. Either way, we can assume that during Siebold’s descent-by-parachute, he was subjected to the threat of hypoxia even if only minutely.

NASA says that normally, high-altitude pilots breathe oxygen throughout their entire flight, even when at lower altitudes. We do know that Siebold was not wearing a pressurized suit nor was he wearing an oxygen mask when he was ejected from SpaceShipTwo.

If Siebold did suffer from hypoxia at some point during his free fall, this could contribute to retrograde amnesia, or the inability to access certain memories that occurred before the traumatic event. We do not know whether Siebold has retrograde amnesia. We only know that he injured his shoulder. 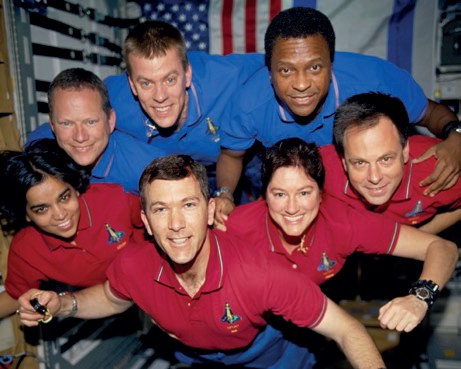 Ebullism is yet another threat to the human body at high altitudes. It is described as the formation of gas bubbles in the body’s fluids. This happens because as pressure decreases, the boiling point of water decreases. Eventually, the boiling point of water diminishes to 37 degrees Celsius—normal body temperature. Because our bodies are made up of 60 percent water, we essentially become incredibly whimsical teapots, with the water releasing as a gas through the process of evaporation.

But it’s so unbelievably cold way up in the atmosphere that the evaporated liquid instantly freezes. And then we’re really in a bind. As water from our lungs evaporates, for example, it instantly freezes, leading to ice formation in the respiratory tract.

In the 2003 article “Physiological hazards of flight at high altitude” in the journal The Lancet, Drs. Andrew Pilmanis and William Sears define ebullism and then explain its effects:

“Effects noted in animals exposed to these high altitudes include severe tissue anoxia, doubling of body volume, unconsciousness within about 10 s, freezing of secretions by evaporation, circulatory arrest, and total flaccid paralysis in about 30s.”

Early scientific experiments established that ebullism sets it at an altitude at and above roughly 19.2 km (also known as the Armstrong limit), although variations in a person’s temperature and internal pressure can allow ebullism to occur at altitudes of 16.8 km. Siebold’s ejection at 15 km makes this scenario unlikely.

What we do know is that even if Siebold did not experience ebullism, future space tourists—in the event of a cabin depressurization or spacecraft breakup—could. That’s because the space industry has defined the “outer edges of space” as 62 miles, or nearly 100 km, well past the Armstrong limit. The possibility of ebullism (and other pressure-related elements) drives home the need for all passengers to don pressurized spacesuits and oxygen masks, not t-shirts and shorts like some idealized visions of consumer space travel.

The vacuum test that exposed Jim Leblanc to near vacuum in 1965.

The elements listed here are only a fraction of the numerous other things either of the SpaceShipTwo crew could have experienced during and after the decompression. It will be many months, and could be many years, before we can endeavor to fully understand the events that took place on October 31. Why Siebold survived and Alsbury didn’t remains, at this point, unknown.

As with any tragic event, the questions are endless, the hindsight is 20/20, and the criticisms are fierce and plenty. But tragic events always have the twisted upside of shaping a safer future, and we can owe much of our successes to previous failures. October 31, 2014 likely will be remembered in conjunction with the first day space tourists soar past the Armstrong line and meet the defined edges of space. Gratitude to see Earth from space is one thing; gratitude for being alive is another.