As the wait for the breakthrough Curiosity announcement recently discussed in media worldwide goes on, let us introduce another rather surprising finding of the famous NASA rover. Ron Hessler, the principal investigator of Curiosity’s Radiation Assessment Detector instrument (RAD), revealed at a mid-November conference that radiation levels detected during Curiosity’s first measurements are similar to those experienced by astronauts in low-Earth orbit. “Absolutely, astronauts can live in this environment,” Hassler, who hails from the Southwest Research Institute in Boulder, Colo., told reporters during the event. 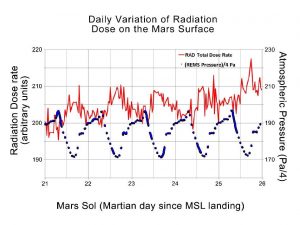 Why the surprise? So far, it was expected that Mars, having a very thin atmosphere and no magnetosphere, would represent a rather harsh environment when it comes to cosmic radiation. On Earth, the atmosphere and magnetosphere work as a powerful shield protecting terrestrial life. With the Martian atmosphere being only 1 % of the terrestrial one, it seems there was reason to be concerned. These presumed high radiation levels would pose a significant threat to potential future astronauts travelling to Mars. Moreover, they might be able to prevent the existence of any sort of Earth-like lifeforms on the planet.

Hassler was reluctant to reveal further details as he believes additional verification of the data needs to be carried out. As the first radiation measurements ever carried out on the surface of another celestial body suggest, the radiation levels Curiosity detected on Mars are about the same as those experienced by crews aboard the International Space Station. 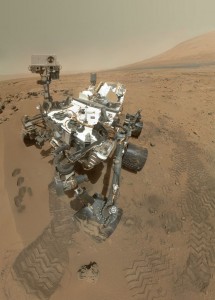 The first measurements of radiation levels on the Martian surface have been made public recently (Credits: NASA).

Also interesting is the fact that the observed levels were increasing and decreasing over the course of each day, reflecting the daily thickening and thinning of the Martian atmosphere.

To determine how much exposure to the harmful radiation future space travelers will get, the team needs to focus on data acquired during solar storms that can blast huge clouds of charged particles into space. According to Hassler, such situation was so far only captured during Curiosity’s voyage, not on the Martian surface.

RAD is one of 10 scientific instruments onboard Curiosity that are designed to determine if the Red Planet could ever have hosted microbial life.