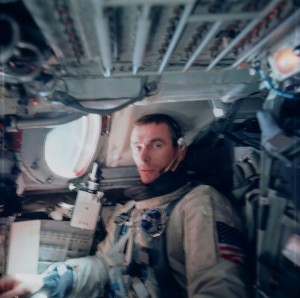 An exhausted Gene Cernan can barely manage a grimace for Tom Stafford’s camera after completing his spacewalk on Gemini IX-A. Had the hands of fate played out a little differently, this seat might instead have been occupied by Charlie Bassett. (Credits: NASA)

In the late spring of 1966, the Gemini IX mission seemed hamstrung by bad luck. When its prime crew, Elliot See and Charlie Bassett, was named in November of the previous year, they expected it to be breathtaking in its pace and challenge. With three days in space, a lengthy spacewalk, a rendezvous, and a docking with an unmanned Agena target craft, the mission would put every one of Project Gemini’s objectives to the ultimate test. Tragedy struck at the end of February, however, when See and Bassett died in the crash of their T-38 jet. The future fortunes of Gemini IX would pass to their backups, Tom Stafford and Gene Cernan … and the mission would take several unexpected twists and turns and bring NASA face to face with the unforgiving nature of space exploration.

Prior to See’s and Bassett’s deaths, Cernan confidently expected that he and Stafford would fly Gemini XII in late 1966. At the time, Deke Slayton, head of Flight Crew Operations, employed a “rotation” system, whereby the backups for a given mission would ordinarily become the prime crew for a mission, three flights downstream. During their training with See and Bassett, Cernan often found himself wandering along the production line of Gemini spacecraft at McDonnell’s plant in St Louis, Miss., to look at “his” future vehicle. At the time of the Gemini IX crews’ announcement, Stafford was in dedicated training for Gemini VI, and Cernan found himself in the peculiar situation of working without his commander. His role would be to shadow Charlie Bassett, one of whose primary objectives was to perform a two-hour EVA and test the U.S. Air Force’s Astronaut Manoeuvring Unit (AMU). Looking like a massive suitcase, the AMU was so big that it would fly into orbit folded up, like a lawn chair, on the rear of Gemini IX.

Steadily, Bassett would maneuver himself along the length of the spacecraft to reach the AMU, then slip onto a bicycle-like seat, strap on the silver-white box, and glide off into space, using controls on a pair of armrests. It was the result of several years of Pentagon-sponsored development work, with an original focus on the Air Force’s Manned Orbiting Laboratory (MOL). “The possibility of using it to send someone scooting off to disable an enemy satellite,” Cernan wrote in his autobiography, The Last Man on the Moon, “wasn’t mentioned in public, because we weren’t supposed to be thinking about the militarization of space.”

From NASA’s perspective, however, the AMU was a critical tool for understanding how effectively astronauts could work outside their spacecraft. In June 1965, Ed White had floated around for a few minutes, using a handheld maneuvering gun, but Bassett would take a far greater leap. His excursion would span more than a full orbit, and he would be in full control of his motion and direction, using 12 hydrogen peroxide jets, all the time remaining attached to Gemini IX by a long tether. Since underwater training did not yet form part of EVA preparation, Bassett and Cernan spent much of their time undertaking physical conditioning in the gym. Both men realised that vast reserves of strength and stamina were essential to handle the demands of an EVA and operate inside a bulky space suit, and both played lots of handball and performed hundreds of press-ups. “Before long,” Cernan wrote, “we grew Popeye-sized forearms.”

The space suit itself was different from that worn by Ed White. This was partly due to the demanding AMU, one of whose searing hydrogen peroxide plumes jetted directly between Bassett’s legs! As a result, the suit’s trousers included additional heat-resistant materials and the complete ensemble featured white cotton long johns for biosensors, a nylon comfort layer, a Dacron-Teflon “net” to maintain shape, aluminised Mylar for micrometeoroid protection, together with fibreglass, and a metallic fabric, woven from the alloy Chromel R. One day, during training, Bassett and Cernan watched as a technician charred the material for five minutes with a blowtorch, confidently telling them that despite the intense heat of the AMU’s exhaust, they would remain comfortable inside their suits. 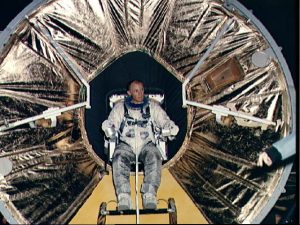 The Astronaut Maneuvering Unit (AMU) would involve a degree of complexity far beyond the EVA of Ed White. Here, Gemini IX-A backup pilot Buzz Aldrin performs a fit-check in the rocket-powered ‘armchair’(Credits: NASA)

Five days before See and Bassett died, the AMU arrived at Cape Kennedy, Fla., for testing. Initial inspections were worrisome—nitrogen pressurant leaked from its propulsion system and oxygen seeped from its life-support apparatus—but by mid-March its woes had been corrected and everything seemed on track for a 17 May liftoff. Early that morning, Flight Director Gene Kranz arrived at his console to oversee the launch of the Agena target vehicle, atop an Atlas booster, followed 99 minutes later by the launch of Stafford and Cernan aboard Gemini IX. The heightened sense of anxiety was not helped when Deke Slayton took Stafford aside for a quiet “word.” Cernan did not learn until later what their conversation was about. It was a conversation that Slayton had with several Gemini commanders whose mission involved an EVA. Cernan’s spacewalk would be exceptionally hazardous and, if anything went wrong, NASA could ill-afford to leave a dead astronaut in orbit. Stafford would have to find a way to bring his crewmate back to Earth.

In his autobiography, We Have Capture, Stafford remembered staring at Slayton in shock. “To bring him back,” he wrote, “the hatch is going to be left partially open, because the attachment point for the umbilical is inside the spacecraft, near the attitude hand controller.” Such an awkward re-entry would not be survivable, for either of them. In reality, he told Slayton, when the explosive bolts blew at the base of their Titan II rocket, signalling liftoff, it was Stafford—as Gemini IX’s commander—who would call the shots and make the difficult decisions if anything went awry. Cernan was well aware that Stafford’s only option would have been to cut him loose, close the hatch, and return to Earth alone. “I knew that Tom would be unable to pull me back inside if I couldn’t get myself out of trouble,” he wrote. “He would work like the devil to rescue me, but eventually would have to abandon me. We both knew it.”

A few weeks later, Slayton had a similar conversation with Gemini X commander John Young and received a similar reply. “There was no way,” Young later reflected, “if anything happened to somebody going outside a Gemini that you could get them back in.” The seat was too narrow and it was impossible for the commander to reach across the cabin and pull an inflated, rigid space suit, with an immobile person inside, with sufficient overhead clearance to close the hatch. It is extremely fortuitous that no such event occurred in Project Gemini. 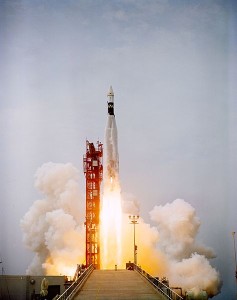 The Augmented Target Docking Adaptor (ATDA) is launched as a replacement for Stafford and Cernan’s failed Agena. (Credits: NASA).

By the time Stafford and Cernan arrived at Pad 19 and were strapped into Gemini IX, all eyes were on the impending Atlas-Agena launch. At 10:12 a.m. EST, the rocket roared aloft … but within two minutes, in the words of Cernan, one of its two main engines “went weird.” The engine wobbled, then inexplicably gimballed into a full pitch down position, effectively “spinning” the rocket into an uncontrolled tumble. All attempts to stabilize the Atlas were in vain. Ten seconds later, the engines shut down and the pencil-like Agena separated from the rocket … but it was too late, moving too fast, too low, and, said Cernan, “all wrong.” So wrong, in fact, that the massive 216-degree pitch down effectively pointed the rocket back towards Cape Kennedy, with a climbing angle just 13 degrees above horizontal. Guidance was promptly lost and the ill-fated booster plopped into the Atlantic Ocean, a couple of hundred miles east of the Cape.

There was a glint of hope on the horizon. Several months earlier, NASA had directed General Dynamics to build a backup Atlas and McDonnell furnished a backup target vehicle, known as an Augmented Target Docking Adaptor (ATDA). It had to be ready within two weeks of any launch accident, and within hours NASA pressed it into service for launch on 1 June. The ATDA had come to be known—somewhat disparagingly—as “The Blob” by the astronauts, but physically it was not dissimilar to the Agena. Its conical docking collar would be jettisoned after orbital insertion and was expected to fulfil all of Gemini IX’s rendezvous needs. At the stroke of 10 a.m. on the 1st, it lumbered off Pad 14 and thundered, almost perfectly into orbit. “Almost,” that is, because the docking collar only partially opened and did not properly separate.

This time, however, it was Gemini IX which was not quite ready to go. Launch was scrubbed when a glitch was detected in the spacecraft’s inertial guidance system and the attempt was rescheduled for 3 June. Tom Stafford had endured a harrowing abort on Gemini VI in December 1965 and pad leader Guenter Wendt could not resist a little fun, nicknaming him “The Mayor of Pad 19,” because he had spent so much time there. Some of the pad technicians also took part in the ribbing by hanging a large sign on the door to the elevator. It read: Tom and Gene, notice the “down” capability for this elevator has been removed. Let’s have a good flight! Gemini IX’s new backups, Jim Lovell and Buzz Aldrin, added their own placard, with a few lines of verse:

We were kidding before

Get your … uh … selves into space

Or we’ll take your place.

Lifting off atop the Titan II was, for Cernan, like “a feeling of slow pulsation” followed by “a low, grinding rumble” as the rocket climbed steadily to orbit. That slow-motion start to the mission soon gave way to an increasing sensation of incredible speed, as the Titan thrust the two astronauts—both gritting their teeth—into the high atmosphere and beyond. When the second stage shut down, Cernan beheld nuts and bolts and bits of string floating around the cabin as he entered the magical realm of weightlessness. With three days of complex objectives ahead of them, their first task was to rendezvous with the ATDA … and find out the extent to which its jammed docking collar might impede the success of their mission.

By Ben Evans. The final part of this article will appear tomorrow.

This article first appeared in AmericaSpace; it is republished with permission of the editor.