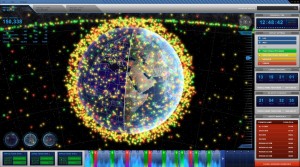 William Shelton, commander of the Air Force Space Command, warned against funding cuts to future space programs, with possible consequences to next-generation Space Situational Awareness (SAA) systems. According to Shelton the new Joint Space Operations Management System (JMS), designed to increase USAF capability to track objects in Earth’s orbit, is threatened with a major funding reduction by the US Congress, on the grounds of past cost overruns in the program. Congress quotes a 2011 report from the Government Accountability Office that pointed out cost and schedule overruns of the Air Force, stating that the Pentagon had failed to deliver promised SSA capabilities for five consecutive fiscal years.

“We overhauled this program, we cut the costs, we’ll field new capabilities years earlier, and it’s put us on a very healthy path toward long-term success,” commented Shelton, adding that, based on “outdated information,” one committee rescinded $40 million. “The loss of this money, which, by the way is 50 percent of the annual budget, could delay the retirement of that old SPADOC system by a full year. That increases our costs and it also increases our risk because of our outdated capability.”

The old Space Defense Operations Center (SPADOC), which has been operational since 1961, is a mainframe system whose “data format […] is IBM 80-column punch-cards.” The system,  that according to the General “is well past its intended life and depends, literally, on eBay maintenance,”  tracks 22,000 such objects, and is limited by outdated instruments and by an expected four-or-five fold growth in debris in the next couple of decades.”If we’re going to retain global response capabilities, space really doesn’t scale well with force-structure reductions,” said Shelton. “You can’t have holes in the architecture and still be able to respond worldwide to any contingencies that might pop up. This creates additional tension in the system right now in the midst of this fiscal climate.”

According to Shelton, the Air Force is trying to  find more cost-effective ways to maintain the space global military capabilities by revamping its acquisition processes for space and cyberspace capabilities, opening up to new commercial players of the launch industry and to the integration of payloads on commercially-owned vehicles. JMS was originally expected to be ready by 2019 and cost $1.2 billion. A restructuring of the program projected a working system by 2012 at half  that cost by building the restructured program around an open architecture.  “If you create an open architecture you can make progress in a big hurry,” Shelton explains. “You can bring things in and if you like them, keep them, if you don’t like them, throw them away and get the next best thing that rolls in.”

In the meantime, the  Raytheon defense company announced submittal of a proposal for the U.S. Air Force’s Space Fence program, a planned SSA system that would provide the capability to detect  smaller objects in low Earth orbit. According to David Gulla, vice president of global integrated sensors in Raytheon’s integrated defense systems business, Raytheon’s Space Fence solution would be capable to “track more than 150,000 pieces of unaccounted space debris that threaten manned space flight and the satellites we all rely on for many critical services, including accurate weather forecasts, navigation and financial transactions.”

The orbital debris problem, which Shelton says “could spiral out of control due to accidental collisions or deliberate, irresponsible actions,” has been recently aggravated by the explosion of a Breeze-M upper stage that released more than 500 pieces.