Boeing and the U.S. Defense Advanced Research Projects Agency (DARPA) are collaborating to design, build and test a technology demonstration vehicle for the agency’s Experimental Spaceplane program XS-1. The spaceplane, called Phantom Express, would reinvent space missions for commercial and government customers by providing rapid, aircraft-like access to space. Within minutes, the autonomous, reusable spaceplane would launch its upper stage to deploy small satellites into low Earth orbit. It would then land on a runway to be prepared for its next flight.

Last year DARPA selected The Boeing Company to complete advanced design work for the Agency’s Experimental Spaceplane (XS-1) program, which aims to build and fly test the first of an entirely new class of hypersonic aircraft that would bolster national security by providing short-notice, low-cost access to space. The program aims to achieve a capability well out of reach today: launches to low Earth orbit in days, as compared to the months or years of preparation currently needed to get a single satellite on orbit.

The Phantom Express is neither a traditional airplane nor a conventional launch vehicle but rather a combination of the two, with the goal of lowering launch costs by a factor of ten and replacing today’s long wait time with launch on demand. The Phantom Express is a fully reusable unmanned vehicle, which will take off vertically like a rocket and fly to hypersonic speeds. The vehicle will be launched with no external boosters, powered solely by self-contained cryogenic propellants. Upon reaching a high suborbital altitude, the booster would release an expendable upper stage able to deploy a 3,000-pound satellite to polar orbit. The reusable first stage would then bank and return to Earth, landing horizontally like an aircraft, and be prepared for the next flight, potentially within hours.

In its pursuit of aircraft-like operability, reliability, and cost-efficiency, the test program includes a flight test demonstration, to fly 10 times over 10 consecutive days, at first without payloads and at speeds as fast as Mach 5. Subsequent flights are planned to fly as fast as Mach 10, and deliver a demonstration payload between 900 pounds and 3,000 pounds into low Earth orbit.

To achieve these goals, Boeing is planning to take advantage of technologies and support systems that have enhanced the reliability and fast turnaround of military aircraft. For example, easily accessible subsystem components configured as line replaceable units (LRU) would be used wherever practical to enable quick maintenance and repairs. The Phantom Express propulsion system is an Aerojet Rocketdyne AR-22 engine, a version of the legacy Space Shuttle main engine (SSME). 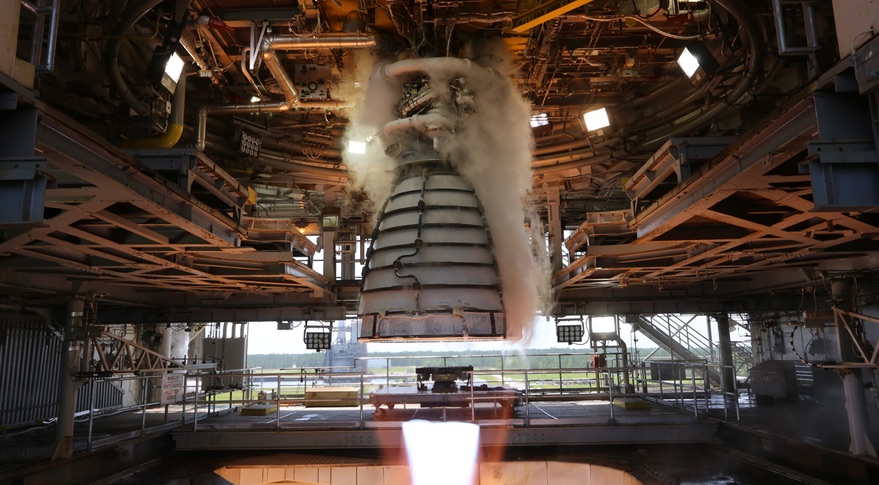 AR-22 being tested at the Stennis Space Center in July 2018. Credit: Aerojet Rocketdyne

Other technologies in the Phantom Express design include:

The Aerojet Rocketdyne AR-22 engine was successfully tested this summer at NASA’s Stennis Space Center in Mississippi. The test campaign consisted in firing the engine 10 times in 10 days, a significant ‘go/no-go’ milestone in order to move forward with the Phantom Express program. The demonstration test began with a 100-second test firing on June 26 and was successfully completed on July 6.

Currently the Phantom Express subsystems are at various stages of critical design reviews or already in fabrication (tanks). The overall vehicle review will take place in early 2019, and full assembly of the vehicle will begin in the spring of 2019. Flight tests of Phantom Express should begin in 2021.

The XS-1 is the latest in a long line of US military attempts at achieving aircraft-like space launch capability. During the 1980s, a number of agencies jointly pursued the X-30 National Aerospace Plane (NASP) project, touted by President Ronald Reagan as someday enabling flights between New York and Tokyo in two hours. The Lockheed X-33 VentureStar, in the 1990s, was the next attempt, expected to succeed the Space Shuttle, but both it and the NASP were terminated because the needed technologies were not yet in hand. DARPA’s Responsive Access, Small Cargo Affordable Launch, or RSCAL program, was its latest try, in the early 2000s, aimed at putting a 300-pound payload into orbit for under $750,000