At a defense industry event in London on February 2, 2016, the U.K. Defence Secretary Michael Fallon briefed a crowd of contractors and reporters on some exciting news. The British Ministry of Defense has agreed to purchase two Airbus Zephyrs, an odd, spindly, solar-powered drone with some remarkable capabilities. The drones “will be able to fly higher and for longer to gather constant, reliable information over vast geographic areas,” explained Fallon. This is not exaggeration: The aircraft will be able to fly at higher altitudes—up to 70,000 feet—and for longer—up to several weeks per flight—than any military drones currently in use.

Sometimes referred to as sub-orbital satellites or high-altitude pseudo-satellites, these high-altitude long-endurance drones fly above 60,000 ft. and are capable of remaining aloft for long periods, possibly even years. In the military sphere, these systems could serve as persistent surveillance and reconnaissance platforms or communications relay point, beyond the reach of air defenses. Meanwhile, Facebook and Google are betting on this technology to bring Internet to remote areas. Here’s what you need to know.

A high-altitude long-endurance drone is an unmanned aircraft that flies at altitudes higher than about 60,000 ft. and can remain airborne for extremely lengthy periods of time. The Northrop Grumman RQ-4 Global Hawk (and the U.S. Navy variant, the Triton), which flies at altitudes of up to 65,000 ft. and can remain aloft for up to 35 hours, according to a company fact sheet, is currently the highest-flying and longest-endurance unmanned aircraft to see extensive use. However, drones such as the Zephyr represent a radical departure from the Global Hawk: they can fly at higher altitudes and, as they are powered by small engines, they have much higher endurance.

High-altitude long-endurance unmanned aircraft can be used for various applications. They are well-suited for carrying out extensive surveillance and image-collection operations. According to an executive at Titan Aerospace, a high-altitude drone company that was acquired by Google, a solar-powered sub-orbital drone could collect the kind of multi-spectral imagery captured by satellites today for about one seventh of the cost. In the military sphere, these aircraft could carry Wide Area Persistent Surveillance systems, which require high-altitude platforms to be effective. These surveillance systems are designed to track activity over an area for an extended period of time.  Sub-orbital drones could also serve as effective communications relay hubs. The potential application that has attracted the most attention, however, is the use of these systems to deliver wireless Internet to remote areas. Google and Facebook are both currently working to develop high-altitude unmanned aircraft specifically for this purpose. 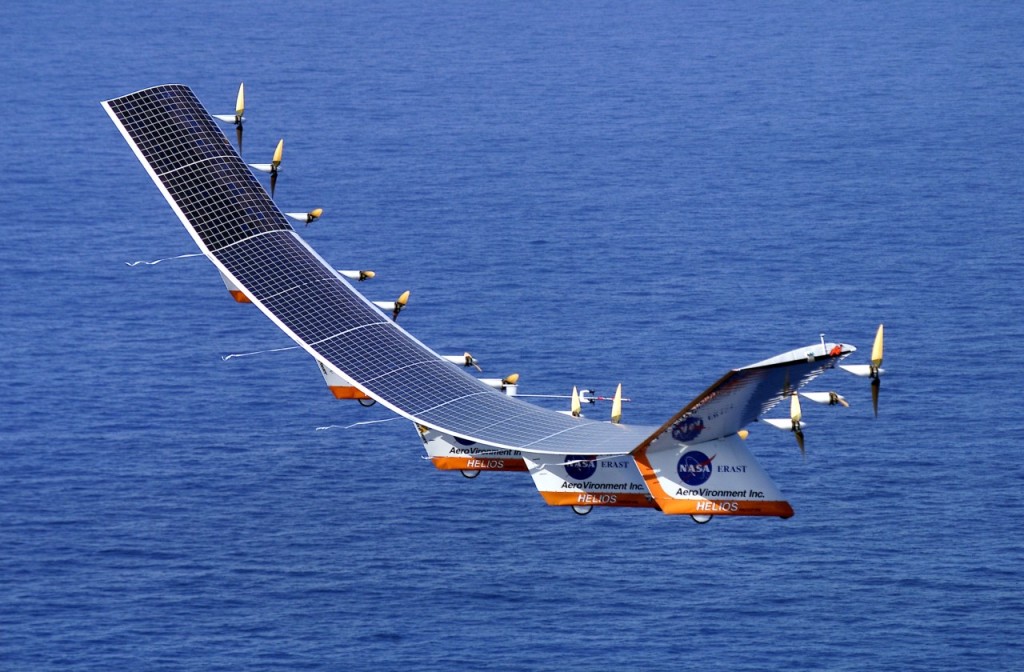 This history of these aircraft is intimately tied to the development of solar-powered flight. Endurance is one of the principal advantages that unmanned aircraft offer over manned aircraft, which can only fly for as long as the pilot or pilots are able to fly safely. The marriage of solar power and unmanned flight is therefore appealing, as it could allow endurance times measured in days and weeks, rather than hours. In 1974, a group of engineers led by Robert Boucher conducted the first successful flight of a solar aircraft, the Sunrise I. The aircraft, which had a wingspan of 35 ft. but weighed just 22 lb., was developed under the auspices of the Advanced Research Projects Agency as part of an initiative to explore ways of creating unmanned aircraft with endurance greater than 12 hours. Over the following decade, engineers in both the U.S. and Europe worked to improve solar flight technology, and began to explore the feasibility of manned solar flight.

In the late 1980s, a California company by the name of AeroVironment, which had been working on a large solar-powered manned aircraft prototype, was contracted by the U.S. government to develop an ultra-long-endurance unmanned solar aircraft. The resulting prototype, called the Pathfinder, demonstrated the feasibility of using the power of the sun to create sub-orbital unmanned aircraft. The program was cancelled in 1993, and the Pathfinder was transferred to NASA. By 1998, the Pathfinder had been tested at 80,000 ft., breaking the altitude records for both solar-powered and propeller-driven aircraft. NASA is continuing its research on solar-powered high-altitude drones with the Centurion and Helios, two variants of the Pathfinder.

During the late 1980s and through the 1990s, NASA also tested High-Altitude Long-Endurance (HALE) unmanned aircraft as a means of collecting environmental data in the upper reaches of the atmosphere. Using two aircraft developed by Aurora Flight Sciences, the Perseus and the Theseus, NASA engineers conducted several dozen flight tests between 1993 and 1999. The initiative aimed to develop technologies that would enable flights at up to 100,000 ft.

Not all early ultra-high-altitude unmanned aircraft are solar-powered. In the late 1980s, Boeing developed a high-altitude long-endurance unmanned surveillance aircraft that demonstrated how the use of lightweight composites was a viable means to achieve high-altitude flights. Powered by two 175 hp engines,  Boeing’s Condor spy plane had about as much power as a large sedan, and yet it was capable of flying at altitudes of over 60,000 ft. The Condor completed extensive testing, but was eventually cancelled due to lack of stealth capabilities, according to a company statement.

One of the most successful HALEs to date, and one of the first to draw the wider public’s attention to the potential of the technology, is the Airbus Zephyr. Now in its eighth iteration, the Zephyr was originally developed in the early 2000s by QinetiQ, a British defense contractor, and was later acquired by Airbus (in 2013). In 2003, the BBC noted that British Airways, in order to make space for a maiden flight of the Zephyr 3 (which was later cancelled because of damage sustained to the balloon that was going to launch the drone), planned to modify the route of its Concorde supersonic passenger jet. Weighing just 90 lbs., the aircraft has a wingspan of just over 70 ft., and can be launched by hand. The Zephyr is only capable of carrying a few pounds of payload, but it has extremely high endurance. The Zephyr holds the record for the longest flight by an unmanned aircraft, at 336 hours (or 2 weeks), which it set in 2010, as well as the record for the highest flight by an unmanned, winged aircraft. In September of last year, the sixth incarnation of the Zephyr conducted the first authorized flight of a sub-orbital unmanned aircraft in civil airspace, flying at 61,000 ft. over the United Arab Emirates for a period of just under 24 hours, demonstrating the feasibility of safely integrating this type of aircraft into domestic airspace. In April, Airbus announced that its Zephyr 8, which will have an even higher endurance than previous versions of the aircraft, will be ready by the end of the year, and will be intended for certification in civil airspace, in addition to military applications. Airbus is reportedly looking to increasingly position the Zephyr for commercial markets, according to Flightglobal. The U.K.’s purchase of two Zephyrs, which will be used to evaluate whether the aircraft is capable of fulfilling the armed forces’ requirement for a long-endurance surveillance drone, represents the first sale of the aircraft.

Aerospace giant Boeing is also hoping to gain a share of the sub-orbital market with its Phantom Eye unmanned prototype. While the liquid-nitrogen-fuelled Phantom Eye—designated an experimental aircraft—will only fly at around 65,000 ft., and could potentially remain aloft for four days, it is capable of carrying a payload of up to 450 lbs., enough for some of the high-powered surveillance and reconnaissance equipment currently used in the RQ-4 Global Hawk, which has a much lower endurance (but a larger payload). The Phantom Eye was tested in collaboration with NASA’s Dryden Flight Research Center, and has so far not progressed beyond an experimental phase. Earlier this year, Boeing Phantom Works president Darryl Davis told reporters that the company was considering the feasibility of mounting a solid-state laser onto a Phantom Eye so that it could be used for missile defence. In 2010, Boeing won a contract to develop a solar-powered ultra-high-altitude drone for the U.S. Defense Advanced Research Projects Agency, with the aim of achieving a platform endurance of five years, but the program was cancelled in 2012.

AeroVironment, which developed the Pathfinder prototypes, continues to bet on sub-orbital drone technology, principally through its Global Observer program. The Global Observer is not solar-powered like the Pathfinder, but rather features six engines driven by hydrogen fuel cells. The aircraft is 70 ft. long, and has a wingspan of 175 ft. The prototype, first conceived through a joint program involving various U.S. government agencies, including the Department of Defense and the Department of Homeland Security (which maintains a fleet of medium-altitude Predator and Reaper drones), completed its first flight in 2010. However, like the Phantom Eye, the Global Observer has yet to enter production, as no agency has committed the aircraft for service. Like the Phantom Eye, the Global observer is designed to fly at up to 65,000 ft. and carry roughly 450 lb. of payload. The company claims that the aircraft will remain aloft for up to six days at a time. Last year, AeroVironment announced that it was partnering with defense contractor Lockheed Martin to develop an “end-to-end atmospheric satellite systems built around Global Observer.”

In the summer of 2013, a New Mexico-based startup with just twenty employees made headlines when it announced that it was developing a solar-powered drone that could fly for up to five years at a stretch. Titan Aerospace unveiled its spindly Solara 50, and the larger Solara 60, ultra-high-altitude prototypes at the Association for Unmanned Vehicle Systems International’s annual Unmanned Systems convention, claiming that the Solara 60 model could carry up to 250 lb. of payload. In April, 2014, Google announced that it had acquired Titan Aerospace for an undisclosed amount. The Internet giant plans to use the solar-powered aircraft as communications relay hubs to beam Internet to remote areas. As part of its Project Loon initiative, Google plans to use the drones alongside high-altitude balloons to create a global wireless network. In May of this year, it was announced that a Solara 50 was destroyed when it crashed shortly after take-off during testing at a facility in New Mexico. An investigation of the crash carried out by the U.S. National Transportation Safety Board found that an unexpected thermal current had destabilized the aircraft, causing both wings to detach from the fuselage. In January, the Guardian published an in-depth report revealing new details about Google’s sub-orbital drone program, including the company’s plans to beam 5G wireless Internet from the aircraft.

Before it was acquired by Google, Titan Aerospace engaged in extensive acquisition talks with another Internet company hoping to bring connectivity to the Earth’s remotest areas: Facebook. But when it was outbid by Google, the social media company turned to a UK-based outfit, Ascenta, which it purchased in March, 2014. A small a secretive firm, Ascenta is said to have been staffed by some of the team members from QinetiQ’s Zephyr program. In March of this year, just one year after the acquisition, Facebook’s Mark Zuckerberg announced that the company had successfully completed the first test flight of a subscale prototype of its high-altitude drone, which will be called the Aquila. The final aircraft is planned to fly at an altitude of between 60,000 ft. and 90,000 ft., and have an endurance of up to 90 days. The company described in a video that it will use laser technology to beam connectivity among a constellation of aircraft, which will then provide wireless Internet to populations on the ground. 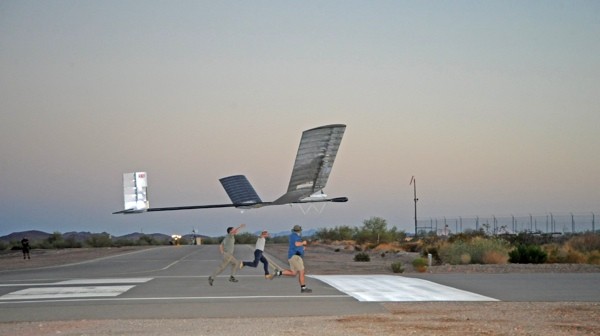 An early variant of the Zephyr being launched Credit: QinetiQ

A version of this story was originally published by the Center for the Study of the Drone.