The International Space Safety Foundation (ISSF) is a recently established US based non-profit organization dedicated to furthering international cooperation and scientific progress in the field of space safety. The final aim of the Foundation is to pursue the advancement of space safety on a worldwide scale and to contribute to making space missions, vehicles, stations, extra-terrestrial habitats, equipment, and payloads safer for the general public, ground personnel, astronauts, and space travellers. Concurrently, the Foundation is seeking to promote measures for a sustainable orbital environment aimed to protect the integrity of space-based safety critical services, such as global navigation systems. 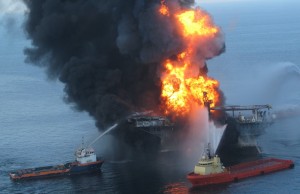 As you know, we learn from failure not from success.

At 9:45 pm on 20 April 2010, during the final phases of drilling an exploratory well in the Gulf of Mexico, a geyser of seawater erupted onto the drilling oil‑rig Deepwater Horizon, shooting 73 meters into the air. An eruption of a slushy combination of mud, methane gas, and water followed. The slushy material quickly transitioned into a stream of gas which then ignited into a series of explosions followed by a firestorm. After burning for approximately 36 hours, the oil-rig sank 1,500m below the level of the water. In the process, eleven people lost their lives, while a gigantic oil spill spawned an environmental disaster of epic proportion.

The findings of the Presidential Commission investigating the Deepwater Horizon disaster bear striking resemblances to those of the Shuttle Challenger and Columbia accidents, or more recently of the Fukushima nuclear power plant disaster. A disaster investigation typically addresses proposals for new regulations, to little effect if the underlying problem is a lack of critical thinking by industry. In this case however, the Presidential Commission on the Deepwater Horizon disaster made a truly visionary recommendation: “The gas and oil industry must move towards developing a notion of safety as a collective responsibility. Industry should establish a ‘Safety Institute’ […] an-industry created, self-policing entity aimed at developing, adopting, and enforcing standards of excellence to ensure continuous improvement in safety and operational integrity offshore”.

Industry should stop thinking of safety as a matter for governments only and start looking seriously into self-regulation. This idea, which may sound revolutionary, is in fact the way maritime business has been operating for 350 years through the so-called Classification Societies (e.g. Lloyd’s Register.) Today’s dynamic high-tech industry cannot be regulated any longer by static safety codes. Government should concentrate on identifying safety objectives and policies, leaving it to industry to find the most appropriate design and operational solutions. The task of certification must be placed on industrial technical teams as excellent and competent as – although independent from – their design team counterparts.

Promotion of serious self-regulation by the commercial spaceflight industry for both manned and unmanned operations is one of the centrepieces of the cooperation between the ISSF and the International Association for the Advancement of Space Safety (IAASS), which together aim to establish the International Institute for Space Safety (IISS). The ISSF Advisory Council is the think-tank working on developing the safety institute.

The Advisory Council, set up in early 2012, is currently focused on developing the ISSF research program, which is intended to sponsor general studies in support of global risk management, conceptual studies on innovative
systems, development of dedicated equipment, as well as performance of detailed studies on specific topics. Particular attention has been devoted to space systems interoperability. ISSF is also active in communicating information to consolidate the safety culture, promoting at the same time the development of safe commercial spaceflight. Special attention has been focused on promoting the development of undergraduate and graduate
educational programs.

The ISSF Advisory Council will support the so-called “ICAO for Space” initiative, a potential “Copernican revolution” in international civil space organization built around the common objectives of safety and sustainability by extending up to Medium or Geosynchronous Earth orbit the mandate of the UN International Civil Aviation Organization (ICAO) in order to regulate, for example, safety of GNSS services.

As Einstein noted some decades ago, “The significant problems we have cannot be solved at the same level of thinking with which we created them.”