On January 25, 2005, an explosion occurred at the Acetylene Services Company (ASCO) facility in Perth Amboy, New Jersey, United States. ASCO generated and packaged acetylene for use in multiple industries. Three workers were killed in the explosion, and one other was injured. The explosion destroyed a storage shed at the facility, and windows were shattered in other buildings. The explosion also heavily damaged a building at a nearby manufacturing site. 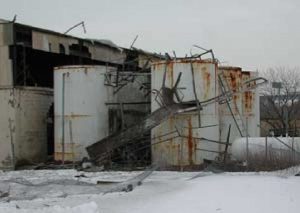 Building damage following the acetylene explosion at ASCO (Credits: US Chemical Safety and Hazard Investigation Board).

The United States Chemical Safety and Hazard Investigation Board (CSB) found that acetylene, a highly reactive and flammable gas, had inadvertently built up inside the storage shed near tanks used in the acetylene production process. Acetylene had flowed back past a check valve through a recycled water line and into the shed where it accumulated, ignited, and exploded. The check valve did not prevent back flow as it should have done, and the check valve design was susceptible to failure, according to the CSB. No other safeguards other than the check valve prevented back flow. The CSB stated that ASCO did perform a hazard analysis in 1996, but that hazard analysis did not identify hazards created by the location of the water line drain in the shed. The hazard analysis should have been updated in 2001, but ASCO failed to do so. As stated in the report, “In failing to update the [hazard analysis], a second opportunity to identify the conditions that led to the explosion was missed.” The report also noted that written operating procedures did not exist for many of the operating processes, including critical ones associated with this accident. For example, the report stated that operators did not use written procedures or checklists for startup of the acetylene generator.

There are several approaches that can help visualize hazards. One approach is to use hazardous element checklists based on previous experience. Checklists are available from a number of sources, although safety practitioners should be aware that no checklist is ever complete. Another approach to identifying hazards is to use past experience to help drive the analysis. This approach works best when developing systems that are similar to those operated in the past. This approach can include review of previous hazard analyses, and can include operational experience and studies of mishaps and accidents.

Design practices, regulations, and standards can assist in the development of analyses. By understanding an accepted practice one can look for ways in which the new system can fail. These standards include safety criteria, such as the proper way to use relief valves. Regulations can be a good source of potential standards because many prescriptive rules, such as some Federal Aviation Administration regulations, came about as a result of an accident or incident.

Still another way to identify hazards is to consider individual failure states. Examples of failure states might include the following: 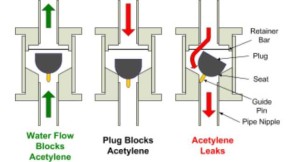 The probable failure mode of the check valves used by ASCO; this failure was not reflected in the company’s hazard analysis (Credits: US Chemical Safety and Hazard Investigation Board).

Hazards should not just consider hardware failures. A hazard analysis should also consider software issues, unanticipated operation, environments, human error, design errors, and procedures. Hazard identification must consider all operating phases and states. The focus of most hazard analyses tends to be on hazards during operation, such as during launch of a space vehicle. However, there are hazards associated with transport of the equipment to the operational site, storage of components, maintenance actions, and so on. Not all hazards apply to all phases of operation. Hazards related to loading of cryogenic fuels in a space launch vehicle will not apply during equipment transport to the launch pad when the tanks are empty, for example. Hazard identification must also consider who or what is at risk. Some hazards may apply to maintenance personnel while others may affect the uninvolved public or hardware assets. For example, a propellant leak may lead to fire and explosion that can injure on-site workers and damage facilities.

As the development life cycle proceeds new hazards are uncovered and some hazards may no longer be relevant. The life cycle includes not only the initial development but also the operation of the system. If the hazard analysis is not revisited and updated throughout the life cycle then resources may be expended on previously identified hazards that may no longer be relevant. More importantly, new hazards may not be identified as the design matures or when operators have experience with the system