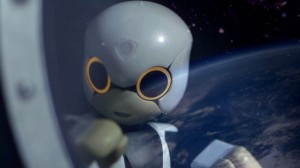 In another month, this will be Kirobo’s view (Credits: Kibo Robot Project).

On August 4, the H-II Transfer Vehicle Kounotori4 will launch from Japan carrying supplies for the International Space Station. Although some of its manifest may shift to compensate for delays in the Progress cargo vessel that was intended to launch ten days earlier, one piece of hardware is certain to be onboard: the 1 kg Kirobo humanoid robot.

Kirobo will not be the first humanoid robot on ISS – he is preceded by the head-and-torso Robonaut 2. However, unlike Robonaut 2 and Russia’s in-development SAR-400, Kirobo’s job will not be to perform hazardous or monotonous tasks inside and outside the station. Instead, Kirobo is intended to be a companion to Expedition 39 Commander Koichi Wakata and to analyze his behaviour and social interactions in the relative seclusion of the station environment.

Kirobo was developed by the Kibo Robot Project, a team of technology and robotics organizations whose mission is to address social issues on Earth, rather than in space:

To help solve the problems brought about by a society that has become more individualized and less communicative. Nowadays, more and more people are living alone. It’s not just the elderly – with today’s changing lifestyles, it’s people of all ages. with a new style of robot-human interface, perhaps a way to solve this problem could be found. This is the goal we have in mind for this project.

Kirobo and his backup unit, Mirata, were designed with this mission in mind. Although developed for smooth operation in microgravity, Kirobo has already begun charming young and old here on Earth. Here is Kirobo’s public introduction: