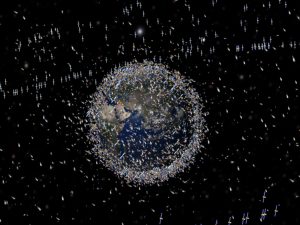 A “beehive” of satellites contributes to the ever growing space debris population. (Credits: NASA).

In recent days there has been a hutesium et clamor, otherwise known as a hue and cry, for a cleanup of space debris. The demand to remove all that space trash is admirable. The human race has been cluttering near-Earth orbits since the dawn of the Space Age in the late 1950s.

Until the last few years, there has been a blatant disregard for collecting or recycling this manmade trash that represents the remnants of many spacecraft and upper stages of launch vehicles. We have now reached the point at which certain regions of space will continue to propagate the number of debris objects, even if we altogether stop launching new satellites into these regions. Left to natural processes the number of debris pieces will continue to increase through random collisions. Each such collision event will result in more and smaller objects.

At the moment the greatest frequency of events can be characterized as small objects encountering larger objects. As time goes on, and the number of large objects decreases, the most frequent collisions will be purely among small objects. The frequency of these events will increase exponentially until a cloud of relatively dense debris dust forms to create a thick layer of very small particles between the altitudes of roughly 750 and 1100 km. The instantaneous density will vary symmetrically with latitude, and be axially symmetric about the poles. The highest densities will occur at high latitudes. Every particle will be travelling at over seven km/sec.

This process will take place over the next several decades to centuries. No one knows, but we do know that the process has begun. The immediate question seems to be: When are we going to clean up space? But, the real question is: Can we clean up the debris? The practical and realistic answer is: There is no way to clean up all, or even a large portion, of the debris. Yes, we could spend a lot of money to remove a few very large objects such as expired satellites and derelict upper stages. But, even with this, the danger to new satellites at altitudes between 750 and 1100 km remains.

If we cannot clean up space enough to relieve the collision threat to operational satellites, what can we do? There are several answers to this question. One approach is to add debris shielding to satellites for protection against very small debris encounters, and take our chances with the larger debris objects. In this case, larger means bigger than 0.5 cm. Another approach might be to stop launching satellites into the dangerous (750 to 1100 km) altitude band. Unfortunately, there are some compelling reasons that have made this band very desirable over the past 50 years. However, the level of desirability is now being countered by the undesirability of potential debris collisions.

One can only conclude that at some point in the future this debris attribute will outweigh the desirable aspects of this region of near-Earth space. The question now becomes: When should we start seriously considering new ways in which we use space? The practical answer is: Now.
Article courtesy of SpaceDaily.com/LaunchSpace.com

Opinions expressed herein are those of the author and may not represent the positions of IAASS or ISSF.