D-Orbit, a space systems company based in Italy, is about to launch D-Sat, a satellite with the ability to remove itself from orbit in a direct and controlled way at the end of its mission thanks to a dedicated propulsive device. This innovative feature is the foundation of a new generation of self-decommissioning satellites that will limit their presence in orbit to what is necessary to complete their mission, preventing further accumulation of space junk. “D-Sat is a milestone in how we deal with the problem of space debris,” said Luca Rossettini, D-Orbit founder and CEO. “We believe that everything that goes up should come down as soon as it served its purpose, and we want to provide a practical and affordable solution to enable this vision.”

Space junk is the population of man-made objects in Earth’s orbit that no longer serve a useful purpose, like nonfunctioning satellites, rocket’s upper stages, and other objects released during a space mission. According to NASA, there are hundreds of thousands of pieces of debris ranging in size between 1 cm (0,4 inches) and 10 cm (4 inches) traveling around Earth, and this number is likely to increase if we keep leaving nonfunctioning satellites in orbit.

In a world that relies on satellite technology for applications like Earth observation, weather forecast, global navigation, disaster prevention, high-precision farming, and self-driving cars, it is important to develop ways to decrease the amount of space junk to reduce the risk of collisions that would destroy satellites, disrupt services, and produce further debris. 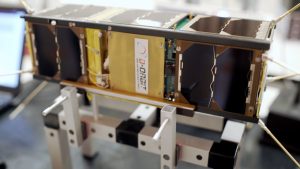 The satellite, built and operated by D-Orbit, is the first in-orbit demonstration of D-Orbit Decommissioning Device (D3), a smart and independent propulsive system designed to decommission a satellite with a direct and controlled propulsive maneuver at the end of a space mission even if the main satellite has become unresponsive. “The decommissioning system built into D-Sat can be scaled up to any size spacecraft,” says Rossettini. “Our dream is to have a system like this installed in every new satellite by 2025.”

D-Sat’s scientific package includes three experiments: SatAlert, Debris Collision Alerting System (DeCas), and Atmosphere Analyzer. SatAlert validates a typical emergency scenario where civil defense agencies need a means to broadcast instructions in areas affected by natural disasters where the ground telecommunication infrastructures have been damaged. DeCas measures and assesses the dynamics of the debris footprint associated to a spacecraft re-entry, testing a way to provide real-time information to airplanes flying over that zone. Atmosphere Analyzer is a data collection experiment aimed at collecting in-situ atmospheric data from the lower ionosphere, a region between 80 km and 150 km that is difficult to reach by both satellites and stratospheric balloons.

The commercial aspect of the mission is funded through a EU Horizon 2020 grant called “SME instrument”, under grant agreement No 711193 for D3 Project. The scientific part of the mission will be partially funded by a crowdfunding campaign on Kickstarter. The satellite will be launched at the end of June 2017.

D-Orbit LLC is an Italian space system company specialized in products and services to streamline commissioning and decommissioning of satellites and constellations, reducing system complexity and cost of operation, and increasing lifetime, reliability, and revenues.