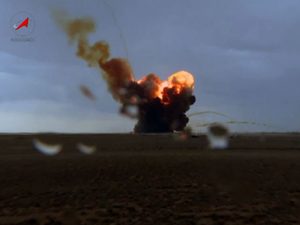 A fire shows where the Proton-M crashed at Baikonour Cosmodrome on July 1. The combustion of 600 tons of fuel may have prevented a more serious environmental catastrophe (Credits: Roscosmos/Vesti.ru).

In the days since the spectacular failure of a Proton-M rocket seconds after its July 1 launch, a few more details have surfaced to shed a little light on the event. So far, most sources are being reported as anonymous and no information has been made public by the official investigation.

Anatoly Zak of RussianSpaceWeb quotes Kaztrk.kz as reporting that air and soil samples taken around the crash site have not turned up significant contamination. This is a very positive sign, since the toxic and corrosive fuels that leaked out of the crashed rocket were of primary concern in the immediate aftermath of the incident. It appears that rain just after the crash controlled the spread of noxious gases and the fire combusted liquid reserves into less hazardous byproducts. If environmental impact is limited, it may be possible for Baikonour Cosmodrome to resume operations earlier than the 2-3 months originally projected. No official time for reopening the cosmodrome has been announced.

Meanwhile, Interfax has reported a potential cause of the incident: premature launch. The news agency reported an anonymous source as saying that the Proton-M lifted off a half second before its intended launch time. As a result, the first stage was not at full thrust at liftoff. This combined with high temperatures recorded in one of the six engines (Zak reports this at 1200°C, indicative of a fire) may have contributed to the failure.

Zak clarified this tidbit with news from Novosti Kosmonavtiki magazine indicating that the fault lay with an interface plate that connected ground equipment cables with the rocket. The interface plate was recorded as moving 11 mm before launch – it’s only supposed to move 5 mm – resulting in early severance of ground connections. It was this severance that prevented the rocket from achieving full thrust before launch, although what caused the movement of the interface plate remains a puzzle.

The 0.4 second early launch with less than full thrust engaged may have left the Proton-M with insufficient power to maintain a stable flight, accounting for the wobbly spin clearly seen in footage of the incident. It is also possible, Zak suggests, that the Proton-M’s flight control system could have responded to the early cable disconnection by suddenly increasing to full thrust in an attempt to clear the launch pad; such a sudden increase could have caused the inferred engine fire.

We will provide updates as more information from the investigation becomes available. If you missed it, here is footage recorded from the July 1 launch: