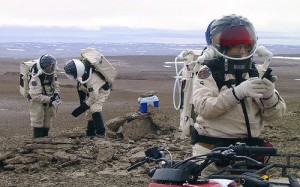 The Mars Society announced that it signed a Memorandum of Understanding with the International Network for Terrestrial Research and Monitoring in the Arctic (EU-INTERACT) to use the Flashline Mars Arctic Research Station (FMARS), located on Devon Island in Northern Canada, as one of the network’s field stations. This partnership comes just after The Mars Society announced an effort to conduct a one-year “mission” in the Canadian High Arctic on May 20, called “Arctic 365,” to learn more about what it will take to visit the Red Planet.

Acting Executive Director of The Mars Society, Susan Holden Martin, said: “The Arctic 365 mission will be the first experiment combining long-term isolation and a sustained program of field exploration under Mars mission simulation conditions, in a relevant Mars analog environment, ever done anywhere in the world. There is a growing interest in environment change in the Arctic, and so it makes perfect sense to extend our program to terrestrial climate research, from which we may discover important clues as to the history not only of Earth’s climate, but that of Mars as well. ”She added that this initiative can glean information not only about Mars, but also about our home planet: “By examining the physical processes that shape the Earth’s climate, we may find important clues to similar processes on Mars, and perhaps discover what may have led to the development of life on Earth. In the distant future, information about Earth’s climate and the effect of greenhouse gases may be useful in developing a plan for terraforming Mars.”

Why the Arctic? Martin related: “The Arctic permafrost, glaciers, and the Haughton Impact provide relevant analogs to Mars science. In addition, changes to Earth’s climate are amplified in the Arctic, and so changes there are considered to be an early indicator of changes that can be expected on a more global scale.” 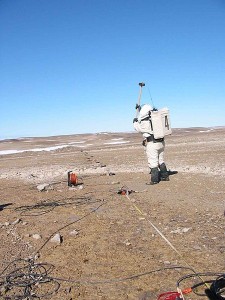 According to Martin, Arctic 365 will ultimately serve three goals: “To provide a test bed for studying the many aspects of field exploration operations on a human mission to Mars; to provide a capable field research laboratory to help further our understanding of the Arctic, the Earth, Mars, and the possibilities and limits of life on our planet and beyond; and to inform and inspire people around the world to greater interest in space and science by bringing before them in a tangible form the vision of human exploration of Mars.”

– By Emily Carney. For more information about Arctic 365 and The Mars Society, visit: www.marssociety.org. This article first appeared in AmericaSpace; it is republished with permission of the editor.