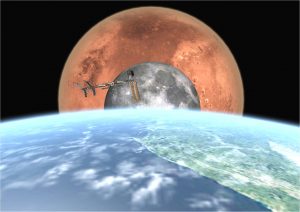 Proposals have been made to use ISS to prepare for missions to the Moon and Mars (Credits: Orbiter Forum and Carmen Felix)

With the analog program Mars500 completed last November, Roscosmos now proposes performing a similar experiment in space.  In a plan submitted to the Russian government this month, the space agency suggests that the ISS could be used to simulate long term interplanetary spaceflights sometime after 2014, and to train crews for a flight to Mars before its operation is scheduled to end in 2020.

“We and our colleagues are discussing the possibility of repeating the experiment in real spaceflight conditions aboard the ISS,” said Alexei Krasnov of Roscomos’ manned flight program. “The main aim is to model the self-sustainability of onboard systems, above all life-support systems.”

The Mars500 project was a space analog based on Moscow’s Institute for Biomedical Problems. It lasted for 520 days. Although Mars500 is one of the most complete analog experiments performed on Earth until now, it did nothing to address some of the most important challenges faced during a real spaceflight, like bone and muscle loss, radiation exposure, and all the consequences of experiencing zero gravity for a long duration.

The ideal design for this experiment would be to increment astronauts’ and cosmonauts’ stays onboard the ISS from their current 6 months to one year or more. The record for longest space flight, at 437 days and 18 hours, is held by Cosmonaut Valery Polyakov aboard the Mir Space Station.

This kind of project would require the collaboration of the ISS partners. NASA is currently working on the ISTAR program, as presented in the April 2011 ISS & Mars conference, in which they plan to install a 10 minute communication delay aboard ISS to mimic the constraints of a deep space mission.

Due to recent launch failures of the last year, Roscomos’ priority is now to develop technology and modernize their rockets, according to a report by Moon Daily, with the goal of developing a reusable space vehicle similar to the retired US shuttle that could eventually take people to Mars and back. Roscomos also faces persistent budget challenges that is has proposed bridging via as yet to be defined alternative financing.

Next April, the second ISS & Mars conference will be taking place in Strasbourg, France; this proposal is sure to be a topic of conversation. For more information visit: www.exploremars.org.

The video below summarizes the Mars500 mission: