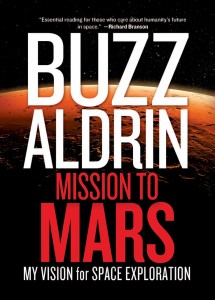 On May 7, veteran astronaut and space advocate Buzz Aldrin releases his new book, Mission to Mars: My Vision for Space Exploration. Co-written with respected space journalist Leonard David, the book is a blend of reminisces, snippets of mission and policy concepts, and revisited analyses of the space landscape to-date.

The book cover sports approbia from a pantheon of popular space, science, and even science fiction figures. Why the second man on the Moon should need Richard Branson, James Cameron, Stephen Hawking, Neil deGrasse Tyson, or Bill Nye to boost his credibility is a bit of a puzzler. Nevertheless, these noted names are happy to encourage us all to buy and read this book.

The book is strongest when it addresses Aldrin’s unique experiences – such as his ruminations on the absence of any PR preparation before the Apollo 11 mission, with the belated realization of how important those few photos snapped on the Moon’s surface would turn out to be; or the feeling on the surface of the Moon of not really knowing what to do next, trying to perform a checklist from memory. An aerospace engineer from MIT before he became the second most famous astronaut in the world, Aldrin’s specialty is orbital rendezvous and he still exercises it. His particular passion now is a cycler trajectory, that would essentially allow near-perpetual back-and-forth travel between Earth and the Moon and Earth and Mars, with passengers hopping on and off at each destination – albeit at nearly impossible and hazardous speeds. He’s still working on that part.

The book spends very little time on these personal experiences and concepts, though. It even allots remarkably few pages to a Mars mission: despite its title, only about a quarter of the book actually focuses on the Red Planet. Instead, this book seems to be an attempt to air all the different potential space missions Aldrin finds of value. Despite repeated affirmations of his commitment to President Obama’s space plan, Aldrin still seems rather fascinated with the Moon. He positions the situation like this: America has already raced for the Moon, and won. Now it’s time to race for Mars and develop the Moon via international collaboration. So far, so good. But Aldrin’s idea of international collaboration is to have the United States lead an International Lunar Development Corporation to which it will not contribute any noteworthy sum of money but will nonetheless enable substantial robotic development. “America should chart a course of being the national leader of this international activity to develop the moon, but not by spending money placing US government people on its surface,” he writes. “There’s no need to spend our money on landers and other things that we’ve done before.” What the US has to offer in terms of non-monetary leadership is questionable in light of the loss of much of the US expertise developed in getting that nation to the Moon in the first place. NASA doesn’t even remember how it built Apollo’s rockets: a team of Marshall Spaceflight Center engineers recently had to rebuild an old Saturn V F-1 to figure out how it worked. With limited financial support and equally limited expertise in lunar travel, it would seem American leadership is not as valuable as it once might have been. Aldrin’s justified enthusiasm for the Moon comes across as blunting his stated purpose in choosing Mars: what he really wants is to not have to choose. Just like the rest of us.

Clearly having gone to print before February’s Chelyabinsk meteor, Aldrin spends unnecessary pages trying to convince an already convinced audience of the potential dangers of near Earth objects. Aldrin toes the party line in promoting manned asteroid missions as useful in building deep space expertise. In fact, since his Mars plan calls for extended operations at Phobos and Deimos, themselves not much more than asteroids, he may even be right.

There are unquestionably some valuable nuggets in this book. Aldrin’s admonition to the US not to race for the Moon again but to engage in an inclusive international development endeavor rings sound. Aldrin warns of the dangers of designing Mars missions exclusively for exploration, rather than toward an ultimate aim of settlement – a path it is very easy to see NASA falling into, almost by accident. He champions the mixed robotic-human mission approach that is becoming the gold standard in space missions, and waxes poetic in one description of the future robots of Mars: “sensor-laden tumbleweed-like vehicles…roll across the planet like dandelions,” “robot hoppers jump from one spot to another,” and “ground-thumping penetrators, deep-drilling robots, and slithering android snakes could be let loose,” he says. These descriptions are clearly more than flights of fancy: Aldrin has kept himself abreast of developments in the space world and knows such machines are on the way, if not already in development. He expresses regret for not advocating more forcefully for reusable vehicles earlier in his career and urges we not lose sight of them now.

Unfortunately, most of this book is not spent on Aldrin’s own ideas and plans; rather it rehashes reports from various space organizations and mission concepts from an even larger variety of researchers, enterprises, and agencies. This reader was able to appreciate the value-add from this book, by the end. But it required some filtering and a modicum of stamina to get there.

Mission to Mars: My Vision for Space Exploration is written by Buzz Aldrin and Leonard David, with foreword by Andrew Aldrin. Published by National Geographic, the book is available on May 7, 2013 in hardcopy, electronic, and audio editions.

In an unusual blending of media, National Geographic has released a trailer for the new book. Take a look: