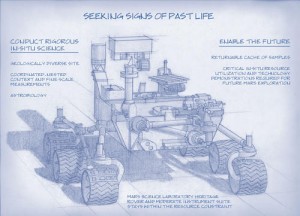 On July 9, the Science Definition Team commissioned by NASA to devise the outlines of a robotic mission to Mars in 2020 publicly released their report. Despite devoting an entire section to “what is new and exciting about this mission,” the announcement generally fell flat, with much of the detail too nuanced to make for good press. The general outlines call for a rover and a mission based on and quite similar to Curiosity. The chief differences include:

These combined advances were designed to meet the objectives handed to the team to:

A. Explore an astrobiologically relevant ancient environment on Mars to decipher its geological processes and history, including the assessment of past habitability.
B. Assess the biosignature preservation potential within the selected geological environment and search for potential biosignatures.
C. Demonstrate significant technical progress towards the future return of scientifically selected, well-documented samples to Earth.
D. Provide an opportunity for contributed Human Exploration & Operations Mission Directorate (HEOMD) or Space Technology Program (STP) participation, compatible with the science payload and within the mission’s payload capacity.

all while remaining within NASA’s ever-tightening budget. At the very least, the mission – always assuming it comes off – should keep the science flowing.

Read below for the full report: