Sometime between July 2005 and October 2008, a weak impactor broke up in the atmosphere of Mars and it’s constituent parts hit the surface. Scientists know this because a THEMIS image from July 2005 of this area shows no indication that an impact had taken place, while a subsequent image taken by the Context Camera (CTX) aboard Mars Reconnaissance Orbiter in August 2008 showed the surface peppered with small impacts and a dark ejecta blanket. This led the HiRISE team to investigate the impact site in October 2008. 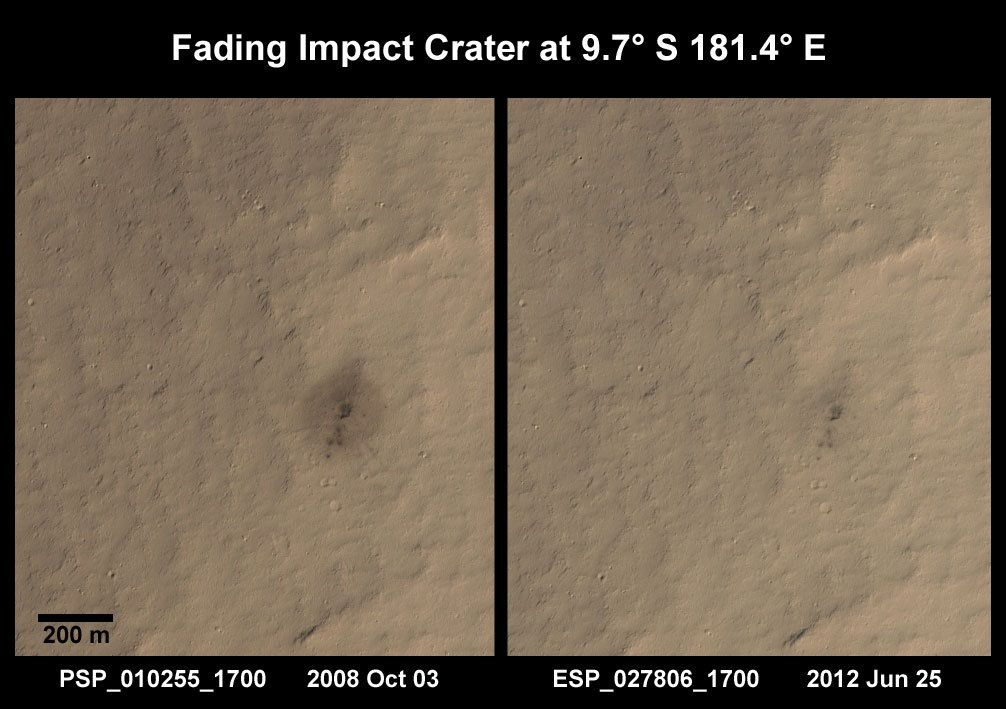 Understanding this process and how long it takes is extremely important to future exploration of Mars. When we understand how fast erosion occurs on Mars we can infer how fast the wind is blowing and the amount of sediment that it picks up. Knowing this will help us to take the appropriate precautions that may end up saving lives and equipment. When we know how ferocious erosion will be we will be able to create barriers that can withstand that erosion.

Additionally, if we understand the rate at which erosion occurs we can ensure that we choose a more permanent features as navigational references once we do send a manned mission to Mars. This will ensure that people don’t get lost or lose sight of their shelter because they expect to see a feature that has recently eroded away. Studying images like the two below will increase scientists understanding of the eroding elements on Mars, and help us to better prepare for the time when we do send a manned mission to Mars.

This article was originally published on July 21, 2012 by Mars Travel. It is republished here with permission of the author.