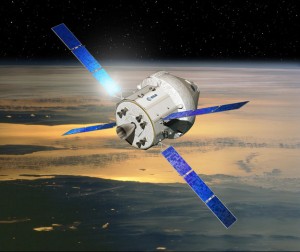 Proposal for the new Orion’s design. The first launch is scheduled in 2017 on SLS (Credits: ESA).

On January 16, NASA and the European Space Agency (ESA) signed an agreement whereby ESA will provide the service module for the Orion spacecraft, while NASA and Lockheed Martin will continue building the crew capsule.

“NASA’s decision to cooperate with ESA on their exploration program with ESA delivering a critical element for the mission is a strong sign of trust and confidence in ESA’s capabilities,” said Thomas Reiter, ESA director of Human Spaceflight and Operations. “For ESA it is an important contribution to human exploration.”

The Orion’s service module will be based on Europe’s Automated Transfer Vehicle (ATV) technology. ATVs have been used to resupply the International Space Station (ISS) since 2008. The fourth ATV in the series, Albert Einstein, will be launched on the top of an Ariane V rocket from Kourou, French Guiana later in 2013.  The service module, placed below Orion’s crew capsule, will guarantee propulsion, power, thermal control, water, and gas.

The agreement is somewhat historical, because this is the first time that NASA is cooperating with a foreign space agency to build a vehicle to launch astronauts into deep space. According to William Gerstenmaier, NASA associate administrator for human exploration and operations, the situation will likely be challenging and difficult but the 2 agencies have learned already to cooperate within the ISS program.  One of the most difficult aspects, according to Gerstenmaier, was to choose the best interfaces between the ATV-derived service module and the Orion crew capsule.  The cooperation will likely change the Orion’s preliminary design from 2 solar arrays to 4 solar arrays, derived from the ATV design.

ESA will provide the design and hardware for the Orion service module as part of its contribution to ISS in the period between 2017-2020. Therefore, NASA would not directly pay ESA for the service module.  The European agency is planning to spend about €150 million ($200 million) to develop the service module for the test flight, scheduled in 2017.  The first demonstration flight launched on NASA’s Space Launch System (SLS) will be an unmanned lunar fly-by, returning to Earth’s atmosphere at a reentry speed of 11 km/s to splashdown into the ocean.

ESA will provide the service module also for the first manned Orion mission scheduled to occur in 2021. The spacecraft will follow the same path of the unmanned mission, around the Moon and back.

Below, the animation shows the Orion’s first mission, planned in 2017 (Courtesy of NASA):