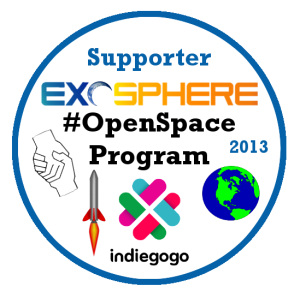 Not much more than one year ago, SpaceX inaugurated  the use of commercial flight to supply the International Space Station, a prelude to commercial manned missions. Many other private space initiatives are following the path opened by SpaceX and in the next years, not only Orbital Science and Boeing will test their manned capsules, but Bigelow will also launch its inflatable modules in its first step towards a commercial space station. Virgin Galactic and Space Expedition Corporation will start their suborbital flights in 2014, further increasing the number of people who will stay in space, even if only for few minutes.

Space is probably going to become a common destination for future human beings, although it will take obviously much more time before it will be truly open to everyone and not only to the people who can afford to pay. Zechariah Blanchard, a Florida entrepreneur with passion for science and technology, believes so much that the future of humanity lies in space and in the development of space technologies that he funded a start-up, Exosphere Inc., to make space more accessible to the masses. To reach this goal, Exosphere has started an open source project to design a space shuttle, intended to be funded through a crowdfunding campaign on Indiegogo.

“Access to space is still extremely dangerous, regulated, and costly. In the current state of the space industry most people will never have the ability to take a trip into space,” says Blanchard. “The Exosphere project intends to change this reality. Within the right environment, engineers, physicists, and enthusiasts alike can work together to develop the technologies that will make humanity a space faring civilization.”

The project necessarily aims for the support of the community of retired space professionals and enthusiasts, coordinated by Exosphere’s personnel, to carry out the design of the spacecraft. According to Blanchard, this formula, given time, could bring the cost of space travel down to that of standard airline travel. The first and main objective of the Exosphere’s crowdfunding campaign is to fund the creation of a secure maker space for the development of space technologies within a legal environment. Blanchard explained that without such a space the creators of technologies at Exosphere could be put in legal jeopardy because of US export regulations limiting non-citizens. Most of the regulation for space related technologies in the US comes from the strict International Traffic in Arms Regulations (ITAR).

Because of ITAR, currently the project is open only to US citizens. “These regulations put quite a large burden on the whole US space industry,” says Blanchard. “Still, we are going to do what we can to open the project up to other countries. This will be a long process because these regulations stem from international treaties and most countries have their own version.”

Exosphere wants to design a shuttle with docking capability, reusability, and modularity that is, at the same time, environmentally and economic sustainable. Although the future goals of Exosphere’s project are very ambitious, and someone could even say unfeasible, Blanchard is confident that a global endeavor supported by new technologies along with crowd-based efforts could succeed in making the great leap. Unfortunately, for Exosphere, this first crowdfunding campaign finished  without reaching its objectives, but Blanchard has already promised a new, better prepared campaign.

Many space startup companies nowadays follow the crowdfunding path to finance their projects; however, the campaigns’ success rate probably does not justify the confidence placed in this funding method. Crowdfunding requires a huge amount of marketing work even if you are Veronica Mars’ producers or Peter Diamandis, co-founder of Planetary Resources and in the end, probably, space projects will always need the good old “crowdfunded” way – taxpayers’ money.

What do you think – will crowdfunding be the wave of the future or is it just a passing fad? Leave a comment below and let us know!